Examine the data in your graphs to answer the questions listed below each set of images. 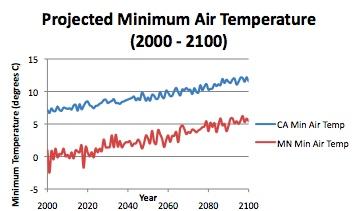 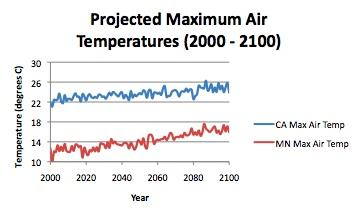 Examine the images above. Are minimum and maximum temperatures predicted to increase by roughly the same magnitude over the next hundred years?

Examine the image above. Which state is predicted to have the greatest increases in minimum temperatures over the next century?

Examine the image above. Which state is predicted to have the smallest increase in maximum temperatures over the next 100 years? 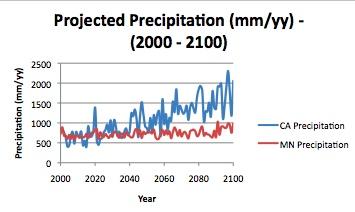 Examine the image above. Which state is predicted to have the greatest increase in precipitation over the next hundred years? 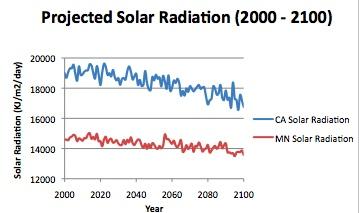 What are the projections for solar radiation in the state that is predicted to see the greatest increase in precipitation? Does this make sense?

Hide
There appears to be lower annual solar radiation for California in modeled future predictions. Since the precipitation is expected to increase in CA, that would imply clouds, so potentially less sunlight would reach the land.

Place an order for temperature, precipitation, and solar radiation projections for your state through the year 2100. Graph the data and compare these graphs with other states.

The EPA Climate Change website has additional information and includes links to what states are doing legislatively to respond to climate change. Other references and state resources are also provided. Explore the potential impacts of climate change on your region and state by accessing the EPA Climate Change website (more info) and then selecting from the links on the page.


Using the graphs you've just created and these published reports, consider these questions:

Hide
If the minimum temperatures rise enough, there could be an earlier start to the growing season, and it could last longer. If precipitation increases, agricultural productivity could also improve in areas where irrigation is used currently and make produce less expensive to grow. Too much precipitation could cause pest problems, however, like fungus.

Hide
Higher temperatures could cause species to migrate north, as seems to be happening with the sugar maple, for example. Pests could be more abundant in warmer (longer growing season) locations.

Hide
States which have a ski industry could see a decline if there are warmer temperatures or less precipitation. Many other industries also rely on a good source of water, so decreases in precipitation could cause industries to relocate.

Show me some examples