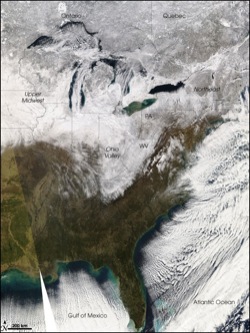 Across the northern tier of the globe, strong winter storms with sensational names such as Alberta Clipper and Blizzard of the Century, are regular features on the daily news. Throughout history, and around the world, Northern cultures have adapted to and embraced these exciting and invigorating but often dangerous events. The aftermath of one such storm is pictured to the right and described below. The following excerpt comes from NASA's Earth Observatory.

"A series of holiday snowstorms blanketed the central and northeastern United States with snow in late December 2007 and early January 2008. Many places in the Northeast received more than a foot of snow in a week's time. Several people were killed in traffic accidents, and road and air travel were interrupted across the country. This image from the Moderate Resolution Imaging Spectroradiometer (MODIS) on NASA's Aqua satellite shows the eastern United States on January 2, 2008, after the latest storm passed over. Two satellite overpasses have been stitched together to create the image. Snow covers the ground in the Upper Midwest, the Ohio Valley, Mid-Atlantic states West Virginia and Pennsylvania, and the Northeast. Despite a succession of December snowstorms, the temperatures had not dropped enough to freeze the Great Lakes, whose clear blue waters are overlaid with clouds. Cold air blowing southeast over the United States picks up moisture over the Gulf of Mexico (bottom center) and the Atlantic Ocean (bottom right), creating parallel ribbons of clouds."

Snow Defines the Climate of the North

Across the Arctic and sub-Arctic, snow cover is a defining characteristic of the environment, covering the landscape for up to 9 months of the year. According to the Arctic Report Card released in October 2009, snow covers up to 47 million km2 of land in the Northern Hemisphere in winter, and recedes to as low as 4 million km2 in summer. Unlike liquid precipitation, snowfall is stored on the land surface, redistributed by wind, and metamorphosed by various physical processes before the spring melt period. 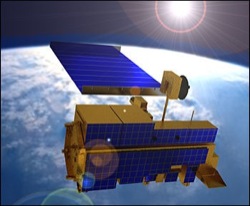 Snow's role in climate and life is intricate and important. Not only does it provide a blanket of cover for delicate vegetation in the winter, it plays an important role in the balance of radiation energy. Because snow is highly reflective, as much as 95% of the incoming solar energy that falls on snow is simply returned to space. The percentage of incoming sunlight that our planet reflects is known as albedo. Because of snow's role in maintaining the balance of energy in our planetary system, scientists have been monitoring it via satellite since the 1970s.

The Moderate Resolution Imaging Spectroradiometer (MODIS), flying aboard NASA's Terra and Aqua satellites, measures snow cover over the entire globe every day, cloud cover permitting. At spatial resolutions of up to 500 meters per pixel, MODIS allows scientists to distinguish between snow and clouds, both of which appear bright white when seen from above. 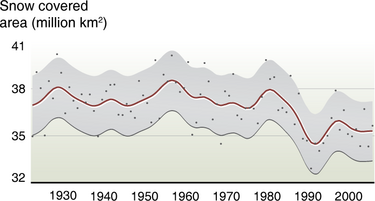 Through daily monitoring of snow cover, scientists have recorded a downward trend for Northern Hemisphere snow cover since the 1960s. (See graph at right.) As snow cover changes, so too will our planet's energy balance. This change in global snow cover and radiation balance has been recently documented by scientists at the University of Michigan. To learn more about their work, read the NASA Earth Observatory Article: Melting Snow and Ice Warm Northern Hemisphere. A reduction in the area covered by snow will result in an increase in the absorption of heat at Earth's surface. This warming has the effect of reducing snow cover even further, leading to additional warming. This series of processes is known as a positive feedback loop. In this chapter, you will investigate the relationship between reflected shortwave radiation, snow cover, and land surface temperature.