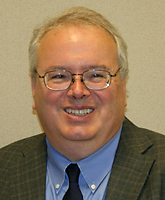 Mark McBride is Professor of Economics and earned his PhD in economics from Washington University-St. Louis in 1979. He has held faculty appointments at Tulane University and Clarkson College of Technology prior to coming Miami in 1983. His research in industrial organization and law and economics has appeared in the American Economic Review, the Rand Journal of Economics, the Southern Economic Journal, and others. His current research is focused on using agent-based computational economics including projects on intra-day trading patterns in financial asset markets, the Colonel Blotto game, and integrating ACE into teaching economics. He has won recognition for his teaching by the Farmer School of Business and the Financial Management Association.

He has been involved in integrating technology into curriculum redesign since 1989, having been funded by the National Science Foundation, Apple Computer, and the Ohio Board of Regents. He served as Miami's Director of Faculty Development in Learning Technologies from 1998-2003 and on the Professional Development Board of the Ohio Learning Network. He frequently presents and leads workshops at national, regional and local conferences on the use of technology in the curriculum. He is currently leading the Department of Economics Top25 project at Miami which is striving to redesign the principles of microeconomics course around active learning pedagogies.