On the national scene, the powers that be are once again squabbling over the question of should the United States meet its future energy needs by finding new sources of energy or by energy conservation. Against this backdrop has been growing in my mind the realization that evolution selects for energy conservation.

You may think this is obvious. But it isn't how I was taught in school, and it isn't how natural selection is being presented to the public today.

Three disparate tidbits of information merged in my mind to form this insight.

Once I began to look at the world through this lens, I found evidence all around me: 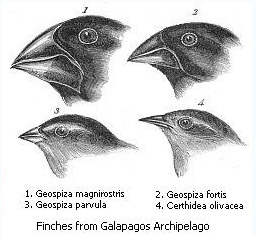 image info
In contrast, the version of natural selection that I learned in school could be characterized as the "Drill, baby, drill" approach: the fittest organisms, the organisms favored by natural selection, are those that are good at obtaining energy, that is to say food (and also good at avoiding predators, resisting disease, and reproducing). Over time different species became expert at exploiting different energy sources, with the archetypical example being Darwin's Galapagos finches.

I think our national conversation about energy would be on a firmer footing it were broadly understood that energy conservation is an essential function of living organisms--rather than merely a "sign of personal virtue."