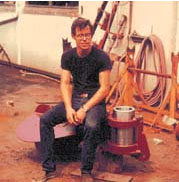 John Diebold at the beginning of his career, 1967 <image info>
Geosciences lost a true original when John Diebold died on July 1, 2010. John's pathway into and through science was convoluted. He was a local boy, from Nyack, who "ran away to sea" on an early Lamont-Doherty research vessel. For decades, he was the practical brains behind the seismic system on Lamont's world-ranging research vessels, most recently the R/V Marcus Langesth. He sailed on three Lamont ships, plus 16 other research vessels, including a staggering 26 legs as Chief or Co-Chief Scientist. Interspersed among various hands-on roles at sea and around the Lamont Machine Shop, he patched together an academic record, first a bachelor's degree, then a PhD. He managed to span the breadth of seagoing science, from the greasiest on-deck repair job, through design of software to turn data into insights, to interpretation of earth processes from novel observations.

In the context of Earth & Mind, John's death has gotten me to thinking about how many different talents are needed to push back the frontiers of knowledge in geosciences...and to wondering whether we are recruiting and fostering the necessary range of talents in the next generation.

This literature quest led me to a book called "The Conative Connection" by Kathy Kolbe. It's a business person's self-help book, written in a breezy style that made it hard for me to take seriously. But I think that it offers an important lesson for decision-makers in science and science education. Kolbe makes the case that humans have four different modes by which they can strive to get stuff done, to make things happen. Her four modes are:

According to Kolbe, any mind can act in any mode, but some individuals are strongly oriented towards one conative mode and may resist or fail in situations that shove them towards a different mode. Other people work well in two modes, and rare adaptable "facilitators" can function across all four modes.

I believe that science, and geoscience in particular, needs individuals who excel at each of the four modes. "Fact Finder" is closest to the public's stereotype of what scientists do, gathering data and probing for information. "Follow Thru," with its strong ability to find patterns, is important in our observational science, where the significant patterns of nature can be subtle and hard to detect amid chaos and complexity. "Quick Start" are the people who create paradigm shifts and pioneer new disciplines and subdisciplines. And "Implementors" are the people who create the tools that make it possible for us to extend our human senses to perceive Earth structures and processes that are too big, too small, too fast, too slow, too deep, too far away, too complicated, too dangerous, or outside the frequency bands accessible to our eyes, ears and fingers.

Kolbe claims that the ranks of teachers and professors at all levels from middle school through university are primarily populated by "Fact Finders." This resonates with my experiences in academia. I would argue that one of the secrets underlying the success of geoscience in general, and Lamont-Doherty Earth Observatory in particular, is that they have made room for, and appreciated, individuals of all four conative modes. [Full disclosure: I score as a mixture of Quick Start and Follow Thru on Kolbe's self-assessment.]

In terms of practical knowledge about active marine seismology I would claim that there was no-one else in the world with such breadth and understanding as John. Especially on the subject of airgun array design and source signatures he was the 'to' in all of international academia.

I am worried that science and science education aren't providing many on-ramps into science for non-Fact Finder individuals. Consider John's 1967 job interview, as recounted in his "Lamont history."

My job interview consisted of answering "yes" to four questions posed in a gravelly voice by the crusty and beloved shop manager, Angelo Ludas:

"Do you work on your own car, young man?"

"Do you want to go to sea, young man?" finally,

"Can you come to work on Monday, young man?

Would such a person find his way into geosciences today?

Spelling Notes: Yes, "conative" has one "n." Weird, isn't it? I thought Kolbe's term "implementor" should be "implementer," with an "e", but I looked it up and it seems that they are both acceptable alternatives for "a person who implements something," so I stuck with Kolbe's "...or." I had a harder time with Kolbe's use of "thru" in place of "through." I stuck with "Follow Thru" because it is a term of art coined by someone else, which means I don't get to decide how I want to spell it. (Surely only a person with Follow Thru in her conative make-up would worry about these details.)

« Engineering & Technology for All?       Kim's First Lesson on Learning Goals »