At the University of Illinois, Urbana-Champaign, the Geology, 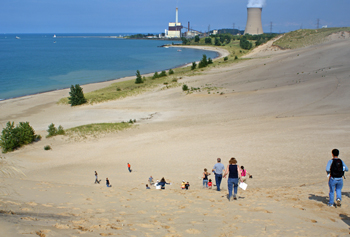 Provenance: Steve Marshak, University of Illinois, Urbana-Champaign
Reuse: This item is offered under a Creative Commons Attribution-NonCommercial-ShareAlike license http://creativecommons.org/licenses/by-nc-sa/3.0/ You may reuse this item for non-commercial purposes as long as you provide attribution and offer any derivative works under a similar license.
Geography, and Atmospheric Sciences departments banded together in 2007 to form the School of Earth, Society, and Environment. Within the School, each department still has its own identity, with its own head, major, and graduate program. But the School's existence provided an opportunity to anchor a new major in environmental studies. Here's the background on how and why the School was founded, and how development of the new, fourth major, provided an opportunity to attract a totally new cadre of students, without weakening existing majors. The information on this page was provided by Stephen Marshak, Director of the School of Earth, Society, and Environment (and former Head of the Department of Geology), and was compiled by Carol Ormand in November, 2009.

Jump Down To: Meeting the University's Expectations | Forming the School of Earth, Society, and Environment | Results

At the University of Illinois, Urbana-Champaign, the Department of Geology and similar small science departments were facing a tenuous future a few years ago. The geology department could see the writing on the wall: as a small department in a large university facing tight budgets it had trouble competing for resources against other, larger units. While the department was doing well in comparison with geoscience departments at similar institutions, its footprint was too small to be sufficiently visible in a large state university. How could a department with 50-60 majors make a strong case for adding faculty, when some departments (e.g., Psychology) had as many as 1500 majors? And how could a small department (< 15 faculty) compete with large departments (> 50 faculty) in terms of the dollar value of external grants? The department recognized an urgent need to broaden its footprint.

Keeping pace with the teaching expectations of a large university is not a new challenge. In the early late 1980s, the Department of Geology faced the challenge of attracting more students into its General Education courses. To do this, they restructured entry-level courses to make the courses more appealing to a wider variety of students. For example, they began offering courses such as "Planet Earth," "Natural Disasters," and "History of Life," as 3-credit courses, in addition to continuing to offer 4-credit traditional physical geology courses. Faculty who enjoyed large-class teaching and were successful at engaging students in this format set these courses in motion. Within 5 years, enrollments in the introductory geology courses rose from fewer than 400 per year to more than 3,500 per year. As a result, the department's service to the University, measured in terms of instructional units per faculty member (IUs/FTE) rose significantly. But the University still demanded to see a dramatic improvement in the number of majors/FTE.

The target of increasing the number of majors proved to be more elusive. The Geology Department tried to appeal to a broader audience by introducing an environmentally-focused option within the Geology major. This approach did indeed bring a few more students, but because of its flexibility, it also lured in a significant fraction of traditional geology majors -- overall, the net gain in majors to the department was about 15 - 20%. Ultimately, adding an environmental option within the major did not make a huge difference in the major count, because from the perspective of general liberal arts students, it was still seen as a "geology major," focused on students who planned a career in geology. To drive a significant increase in the number of majors (e.g., an increase by a factor of 3 or 4), the department realized that it had to appeal to "liberal arts" students who aren't necessarily interested in being geoscientists. On its own, however, the department didn't have the flexibility, expertise, and resources to offer a broad spectrum of environmental courses within the department. And even if they could do so, if the major were anchored in the department, it would still be seen as been a "geology major," and thus would not be likely to have the broad appeal.

Forming the School of Earth, Society, and Environment 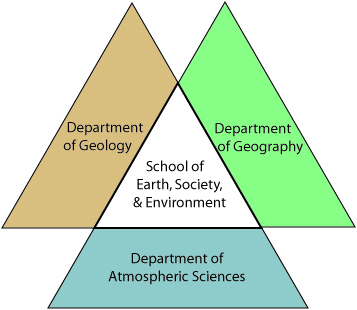 Geology was not the only small department struggling with the challenge of attracting majors at UIUC. Two other departments in the College of Liberal Arts & Sciences were in similar circumstances, and the heads of the three departments began to work together to develop a new model of operation. In 2007, the three Earth-related departments -- Geology, Geography, and Atmospheric Sciences -- formed an alliance called the School of Earth, Society, and Environment (SESE). Within the School, each department still has its own identity, with its own head, major, and graduate program.

Just before the School concept began to take shape, Prof. Don Wuebbles in the Department of Atmospheric Sciences received a NASA grant to develop a new interdisciplinary major in environmental studies. Initially, the new major (called the "Earth System, Environment, and Society" major) was to be anchored at the College or Campus level. But as SESE took shape, it became clear that the School would be the natural home for the new major: the School's faculty offered both a science context (from all three departments) and a social science context (primarily from Geography). As the SESE brochure explains, "The major includes two options -- Society and the Environment and Science of the Earth System -- both of which allow students to explore a wide range of courses from across the University that relate to environmental themes. Students graduating from the program have an educational foundation from which they can head in many directions: law, politics, business, activism, science, or service." The new major (which is being renamed the "Earth, Society, and Environment" major, since it is anchored within the School), does not compete with the majors of the three departments. Rather, the count of new students that it brings in adds to the total count of students in the School, and thus effectively improves the total major/FTE count for the departments in the School. In this regard, the structure established at UIUC differs significantly from that at other universities, where environmental studies programs have been set up as independent units that compete with existing departments for students.

The new interdisciplinary major initially utilized existing courses from each of the departments within the school, as well as courses from many other departments across campus. Now that the new major has started to operate, it has become clear that some aspects of the major's structure need to be refined, so as to streamline advising, and that a set of about 6 new courses needed to be designed at the junior-senior level, to be accessible to School's majors (considering the diversity of backgrounds that the majors have). These courses, now in development, include "Water Planet - Water Crises," "Earth's Resources and Sustainability," and "Society's Response to Natural Disasters." 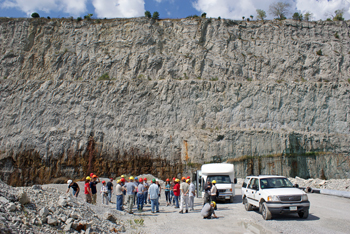 SESE students on a field trip to northern Illinois that combines geology and environmental studies.

Because of the School's name, the Earth, Society, and Environment major proved to be instantly more visible to students across campus than similar options hidden within existing majors had been. There was a clear clientele on campus whose needs were met by the new major. Specifically, students who wanted a "liberal arts major" that connected to issues of the environment and sustainability found the School's major to be appealing. Thus, advisors across campus began to direct students to the new major. As a result, the major, which is now only in its second full year of operation, already serves as the home for 135 students, and it still is growing rapidly. These majors are in addition to the department-based majors and graduate students. When added together, SESE now is the home for over 400 majors and graduate students. Faculty in the School also teach over 6,000 general education students per year.

The visibility and impact of SESE and its component departments is now approaching the University's expectations, and the higher administration of the University now uses the School as an example of a creative solution to the 21st century challenges facing large universities. The proactive approach of building alliances and new majors, rather than of trying to justify the status quo, has led to remarkable growth. This year, the College of Liberal Arts & Sciences granted the Geology Department's request for a new faculty line -- one of only 12 new lines granted, from among more than 65 requests. At a time when budgets are tight, and some geology departments at large universities are being threatened with elimination, that's an encouraging sign.