Using cosmogenic isotopes to resolve the history of fjord glaciation 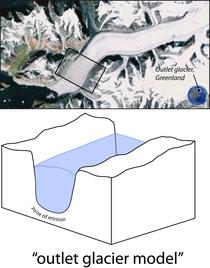 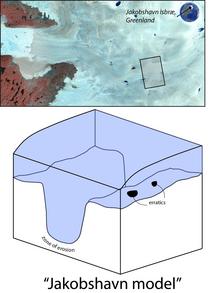 Hide
Figure 2. The Jakobshavn model for fjord formation involves complete occupation of a landscape by an ice sheet. The upper image is from Google Earth; the calving front of Jakobshavn Isbrea is ~10 km wide. 69° 10'N, 49° 40'W. Details

Hide
Figure 4. Erratic boulders like this one are sometimes found in high-elevation landscapes between fjords. In this photo, the scientist is collecting a sample from the erratic boulder for cosmogenic isotope analysis. From Briner et al. (2006). Details

Hide
Figure 5. This plot shows cosmogenic exposure ages from a fjord landscape. Erratic samples (circles), from all elevations (including high elevations) yield relatively young ages. This suggests that even the highest locations on the landscape were covered by ice ~10,000 to 25,000 years ago - during the last glaciation. Interestingly, highly weathered bedrock (black squares) yields relatively old exposure ages, no matter what elevation the bedrock is from. Together with the erratic samples, these weathered bedrock ages suggests that despite ice covering the landscapes that contain weathered bedrock, the bedrock was not eroded. Finally, glacially eroded bedrock (black diamonds) only yields relatively young ages, indicating that it was carved by ice ~10,000 to 25,000 years ago - during the last glaciation. Combined, the data support the Jakobshavn model of fjord glaciation. From Briner et al. (2006). Details

Introduction
In high-latitude regions, the edges of continents are dissected with large, spectacular fjords. Although we know that fjords are deeply carved glacial valleys that have their bottoms below sea level, understanding the history and style of glaciation of fjords during late Pleistocene glaciation has been more difficult. Two contrasting models of fjord glaciation have been debated for decades.

Field evidence from fjord landscapes commonly reveals fresh, glacially-eroded bedrock within fjord valleys, and highly weathered bedrock on the uplands adjacent to fjords. One model of former glaciation interprets the field evidence as indicating that fjords contained ice sheet outlet glaciers that were confined within the fjord valleys, much like some outlet glaciers draining the Greenland Ice Sheet (Figure 1). According to the "outlet glacier model," outlet glaciers eroded the valley bottoms and sides (making striated and polished bedrock), and left bedrock on the adjacent uplands ice-free and thus allowed to weather (Ives, 1978). The other model suggests that a thick ice sheet smothered the entire landscape, in which case ice streams like Jakobshavn Isbræ occupied fjords (Figure 2). According to the "Jakobshavn model," the base of the ice streams would have slid across the valley floor, flowed very fast, and caused intense glacial erosion (Sugden, 1978). Sectors of the ice sheet that covered the upland areas adjacent to fjords would have been frozen to their beds, which would have essentially protected the bedrock from glacial erosion. So, how do we decide which model to follow?

Findings from Baffin Island fjords
The recent application of cosmogenic isotope analysis in rock samples collected from fjord landscapes on Baffin Island (Figure 3) has added new knowledge (Briner et al., 2006). Bedrock surfaces within fjord valleys provide cosmogenic isotope ages of around 12,000 to 10,000 years ago, indicating the time when the vast Laurentide Ice Sheet retreated out of Baffin Island fjords. Bedrock surfaces on the upland areas adjacent to the fjords contained much higher concentrations of cosmogenic isotopes, equivalent to many 10s to 100s of thousands of years of exposure. These measurements so far are consistent with both models of former ice cover. However, in addition to measuring cosmogenic isotopes in the upland bedrock, cosmogenic isotopes have also been measured in glacial boulders perched on top of bedrock in the uplands (Figure 4). Previously, it was argued that the glacial (erratic) boulders were deposited on the uplands prior to the last Ice Age, and some even argued that the boulders were not glacial in origin. However, the cosmogenic isotope concentrations of boulders from the uplands yielded the same age as those ages from the fjord valleys (Figure 5). This indicates that the Laurentide Ice Sheet occupied both the fjords and the adjacent uplands during the late Pleistocene, and that both regions were deglaciated around the same time.

Ultimately, these data favor the "Jakobshavn model" of fjord glaciation for Baffin Island fjords. The results demonstrate that highly weathered bedrock with a high concentration of cosmogenic isotopes is not necessarily evidence for the lack of glaciation. Rather, ice sheets can be fickle eroders, gouging deep valleys in some locations, and protecting landscapes from significant erosion in others. In fact, it may be that once ice sheets produce deep fjords, they funnel most of their ice through these locations, which become foci for intense ice sheet erosion. In turn, those areas adjacent to the fjords are spared of fast-flowing, overriding ice, and become locations where underlying bedrock is preserved from glacial erosion. Almost certainly, the "outlet glacier model" and the "Jakobshavn model" of fjord glaciation represent part of a continuum of how fjords can be occupied by ice sheets.