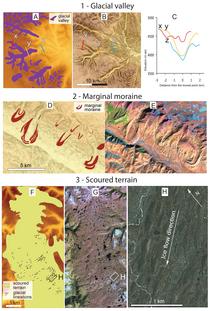 Hide
Fig. 3. Glacial Landforms mapped from remotely sensed images.(1) Glacial valley as (A) mapped on DEM, (B) seen on the DEM draped with a slope image, and (C) in cross-profile, where glacial U-shaped sections (x, y) differ from V-shaped sections (z); (2) marginal moraine as (D) mapped on DEM and (E) seen on landsat image; and (3) scoured terrain and lineations as (F) mapped on DEM and seen on (G) Landsat image and (H) Google Earth. Panel (H) is indicated in panel (F) and (G) (adapted from Fu et al., in press). Details 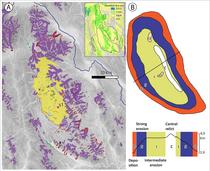 Hide
Fig. 4. Glacial landforms of the Haizishan Plateau (adapted from Fu et al., in press).(A) Detailed glacial landform map of the Haizishan Plateau (Fu et al., 2012). Locations s1 and s2 denote the positions of saprolite profiles. The inset shows the DEM with granite bedrock delineated as black polygons. (B) A sketch map and cross-profile of the zonation of landforms formed by the Haizishan ice cap. Capital letters denote D-depositional zone, S-zone of strong erosion, I-zone of intermediate erosion, and C-central area with minimum erosion. Saprolite locations (inside the pink polygons) are labelled s1 and s2. Details

The Haizishan Plateau, a currently ice-free low-relief plateau on the southeastern Tibetan Plateau, exhibits a clear zonation of glacial landforms formed by former ice caps (Fig. 1). These landforms and landform assemblages are unique to the Tibetan Plateau and make the Haizishan Plateau stand out among the prevailing alpine glacial landforms elsewhere. Because glacier expansions on the Tibetan Plateau mainly occurred as valley glaciers and piedmont glaciers, the alpine glacial landform systems on the plateau are relatively well-known, while there is unfamiliarity with ice cap landforms. Here, we talk about how to identify former ice caps using geomorphologic mapping and examine the thermal regime using landform patterns.

The Haizishan Plateau is a low-relief granite pluton surrounded by metamorphic sedimentary rocks (Fig. 2). It is located primarily at 4000-5000 m above sea level (asl) with internal relief up to 300 m. An elongated bedrock ridge protrudes 100-300 m above the central plateau surface; it is a broad flat area to the west and high relief terrain to the east. The plateau is separated from neighboring mountainous terrain by tectonic basins and fluvial valleys. It is ice-free today as the modern equilibrium line altitude (the altitude where snow accumulation is equal to the loss) is situated at 5400 m asl in this region. The southeastern Tibetan Plateau is predominantly affected by the Southwest Monsoon and glaciers there are classified as maritime (warm-based).

Field investigation and geomorphological mapping show abundant glacial landforms including glacial valleys and moraines which are well-known landforms for the Tibetan Plateau. The glacial valleys are U-shaped and cut deeply into the plateau margin but lack cirques (bowl-shaped depression, formed at the head of valleys by glacier erosion) at their heads (Fig. 3A). Numerous marginal moraines are present as arc-shaped lateral or frontal moraines in outlet valleys and sinuous moraines on the plateau surface (Fig. 3B). These moraines indicate the margin of former Haizishan ice caps and glacial extents of different stages can be reconstructed by correlating moraines. In addition, other typical glacial landforms, such as glacial scoured terrain and glacial lineations, were also observed on the plateau surface (Figs. 3C, 2.3). They are typical landforms formed by ice sheets or ice caps. Scoured terrain is a landscape of the knock-and-lochan (rock hill and small lakes) type characterized by numerous water-filled rock basins and intervening rock knobs, resulting in a widespread occurrence of lakes. Lineations are primarily composed of thick till and of till draped over a bedrock core. They tend to cluster in parallel or sub parallel groups and, in some cases, such clusters exhibit a slightly radiating pattern at the mouth of valleys or converge towards the head of valleys. The direction of lineations indicates the paleo-ice flow direction.

The depositional zone consists of numerous moraine complexes formed by outlet valley glaciers. They are usually composed of a few large ridges; two moraine sequences a few kilometers apart are typically located in the outlet valleys.

The erosion zone is located in between the depositional zone and the margin of the low relief plateau surface. It is characterized by glacial valleys separated by unmodified plateau surfaces or bedrock ridges. Outlet glaciers from the ice cap strongly eroded pre-glacial fluvial valleys to form U-shaped valleys, but the intervening areas suffered little or no glacial erosion while still being ice covered, as indicated by draped erratic boulders.

The intermediate erosion zone is located above the zone of strong erosion, on the plateau surface, where there is a zone of intermediate erosion characterized by scoured terrain. Enormous rock basins and intervening rock knobs, roche moutonnée landforms (rock hills shaped by glaciers), striated surfaces, and lineations are observed here. This landform assemblage indicates that warm-based ice affected the broad low-relief granite plateau through the subglacial processes of plucking and abrasion. A presence of saprolite (weathered granite bedrock) profiles underscores that the zone only experienced intermediate erosion which was perhaps patchy in nature. Although it is unclear how long it took for the saprolite to form, it is not likely that the saprolite here developed after the last glaciation, because boulders and pebbles in the overlying till layers lack extensive weathering features.

The relict zone coincident with the area of highest topography, where the occurrence of a metamorphic sedimentary unit indicate that it was an area of cold-based ice or resided beneath an ice-divide of the ice cap and therefore was not affected by glacial erosion.


The presence of well-preserved saprolites and the central zone of limited erosion on the plateau surface indicate that some areas were consistently protected by cold-based non-erosive ice (Fig. 4). The juxtaposition of preserved landscapes with erosional landscapes indicates a subglacial boundary between areas of different basal thermal properties as part of an ice mass with both warm-based and cold-based conditions. The complex thermal regime of the Haizishan ice cap as indicated by the described zonation of landforms mimic similar patterns produced underneath Quaternary ice sheets in Fennoscandia. The Fennoscandian Ice Sheet developed complex thermal regimes such as evidenced by the juxtaposition of relict uplands and strongly eroded intervening glacial valleys. In unison with inferences for the Fennoscandian and other northern hemispheric Ice Sheets, topographic control was a dominant factor for the establishment of the complex thermal regimes. For the Haizishan ice cap, this meant that the transition from cold-based ice across the central relict ridge and part of the low relief plateau surface (producing limited erosion and deposition), to warm-based ice in the valleys radiating off the plateau margin (producing distinctive glacial valleys through large amounts of bedrock erosion), was topographically determined but variable through time.