The Kern River, California: A Story of Uplift, Incision, and Flood Control 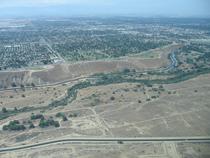 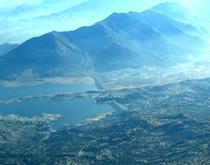 Within Kern County, the present day Kern River is an example of two distinct river environments. In the Sierra Nevada, the Kern River is in a classic V-shaped canyon (Fig. 1) as it erodes towards base level. In this part of the river, erosion is the dominant force. Where the Kern enters the San Joaquin Valley, it is very near its base level, and erosion is replaced by deposition as the main process. Here the Kern meanders within its floodplain depositing layers of sediment (Qa in Fig. 2) as alluvial fans at the canyon mouth, along the riverbed, inside meanders, and in natural levees (Fig. 3).

It is the V-shaped river's tendency towards base level that unravels the Kern River's history. Because its evolution coincides with the rise of the Sierra Nevada, the alluvium composition and river terraces carved into the southern Sierra can be used to determine periods of uplift and changing river courses. Like many rivers in the batholith, the Kern shows two distinct knickpoints (locations where gradient changes rapidly), indicating two past episodes of slow river erosion--one beginning around 73 million years ago, and another around 53 million years ago--separated by periods of rapid erosion during block uplift. In addition to these knickpoints, there are substantial terraces (abandoned flood plains) in the main Kern River indicating at least two later episodes of accelerated erosion--the most recent of which began about 3 million years ago. This time period coincides well with the change in tectonic regime and rise of the Sierra Nevada.

In addition to the change in erosion rates of the Kern River during the uplift of the batholith, a change in its pathway is visible through the southern Sierra. The meandering nature of the river, high in the Sierra Nevada, implies an established river course prior to any uplift. Furthermore, cobbles found within the Bena and Kern fans (Fig. 4) likely originate from the Cache Peak volcanic center (Tv in Fig. 2). This suggests that a Kern River predecessor ran east to west, like the other rivers of the Sierra Nevada.

The Bena submarine fan was deposited about 25 to 12 million years ago, probably by the Kern River predecessor (Fig. 4), exiting more or less at modern-day Walker Creek. With the change in tectonics due to the encroachment of the San Andreas Fault, the Kern Canyon Fault was reactivated some 10 million years ago. The west block was uplifted, and the Kern River modified its course to the current drainage path out of the foothills, depositing our present day aquifer: the Kern River alluvial fan.

In modern times, the meandering depositional stage of the Kern River onto the San Joaquin Valley floor was dominant, and during the past two centuries several floods and course changes (avulsions) occurred. At one time, two channels split from the main flow of the Kern River at present-day Bakersfield's location. The primary channel flowed south (more or less down what would become Union Avenue) through swamps and into ancient Kern Lake. The secondary channel flowed (along what would become Old River Road) into a significantly more expansive Buena Vista Lake. Kern Lake flowed to Buena Vista Lake (Fig. 5), and when that overflowed, it sent water north toward the San Joaquin River.

In 1861, a flood obstructed the primary channel with debris, leaving the secondary route pumping the full volume of water in 1862. By then, early settlers were draining and filling in the swamps to provide solid dry land for settlement and agriculture. Unfortunately, seven years later (on New Year's Day 1868), another flood devastated the area, and the river shifted to its present location.

The Buena Vista Lake that exists now is a man-made reservoir that came out of a late 1800s battle over the Kern River water rights. Henry Miller, who had thousands of acres of land on the river, eventually won with his riparian rights over James Ben Ali Haggin. (Riparian rights are a system of allocating water "shares" amongst those who own land surrounding the water source). Almost immediately after his win, Miller made a deal with Haggin: for two thirds of the Kern River, Haggin would build a reservoir for Miller. Consequently, the new Buena Vista Lake came to be.

Every spring, snowmelt from the Sierra transformed the mild mannered Kern River into a swollen fury that flooded Bakersfield regularly. A few spectacular floods in 1893, 1914 and 1916, and less impressive ones upset the citizens greatly and by the early 1950s, the Isabella Dam and Reservoir (Fig. 6) were constructed as part of the 1944 Flood Control Act. Not surprisingly, during the Dam's construction in 1950, yet another devastating flood occurred. The functionality of the Isabella Dam to regulate river flow was proven in 1966 when the lake level was absolutely full and 598,400 gallons of water per second raged over the spillway and down the Kern Canyon, and Bakersfield didn't flood.

This vignette is composed of excerpts from: