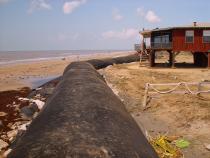 Hide
Figure 1. Geotextile tube along the coastline at Caplen, Texas, 19 July 2003. Sand that was used to bury the tube has been removed by storm surge and enhanced wave action caused by the passage of Hurricane Claudette to the south. Details

Hide
Figure 2. Aerial view of Gilchrist, Texas, 30 October 2008. The geotextile tube, destroyed by Hurricane Ike, is visible in the swash zone along the coastline. Note that all structures between the geotextile tube and Texas State Highway 87, except one heavily damaged new home on piers, have all been destroyed and washed off of the peninsula. Details

Introduction
The Upper Texas Gulf Coast along the Bolivar Peninsula, east of Galveston, is a transgressive coastline where the beach is currently moving landward up to several feet each year. Thus, erosion has been a major problem interfering with maintaining local and state roads and commercial and residential property (Anderson, 2007). Erosion along this coastline is caused primarily by three natural processes, all of which are exacerbated by human activity: (1) subsidence (sinking of the land caused by the compaction of clay particles), (2) sea level rise (caused in this area by global temperature rise that increases the melting of glacial ice at the poles and expansion of the ocean due to warming), and (3) common storms and tropical cyclones (that erode the shoreline with their wind energy that is translated into the water forming large waves and storm surges). Response to coastal erosion issues in this area has rarely resulted in abandoning the beach area, as people continue to fight futilely against the natural landward movement of the beach. In the late 1990's, tax monies were spent to place temporary (hay bales) and semi-permanent (geotextile tubes) seawalls along the back of the beach, oriented parallel to the shoreline, in an attempt to prevent this landward movement.

Geotextile Tubes and their Purpose
A geotextile tubes, sometimes called a sand sock, is a temporary and easily constructed seawall composed of a tough synthetic casing filled with sand (Fig. 1) (Gibeaut et al., 2003). Placed along the shoreline, geotextile tubes absorb wave energy from storm waves and prevent flooding from minor storm surges (both phenomena can be generated by moderate meteorological events, such as a cold-front passage or as minor as a small summer thunderstorm). They perform well in coastal areas experiencing beach accretion or where the shoreline is stationary. But along transgressive coastlines where the beach is naturally moving landward, such as along the Upper Texas Gulf Coast, geotextile tubes reduce the width of the beach, hasten beach erosion, and increase the damaging effect of storm surges caused by hurricanes.

The Use of Geotextile Tubes Along Bolivar Peninsula and Their Effects
After Tropical Storm Frances made landfall along the Upper Texas Gulf Coast in 1998, geotextile tubes were installed along several stretches of the Texas coastline, including an area along Bolivar Peninsula in the Gilchrist and Caplen communities, to protect the area from storm surges and retard the landward movement of the beach (Gibeaut et al., 2003). Like any seawall, geotextile tubes emplaced along a transgressive coastline reduces the beach width by prohibiting the natural landward movement of the beach (Anderson, 2007; Morton et al., 1983). In addition, as waves strike the tube the wave energy is reflected downward. This causes the wave energy to remove sand in front of the tube, steepening the beach's gradient (Anderson, 2007; Morton et al., 1983). Without the gentle slope of the natural beach profile, larger waves could then strike the tube during the storm surge of a tropical storm or hurricane increasing the likelihood of destroying the tubes. If the storm surge is greater than the height of the tube (typically 6-8 ft.), these large storm waves will pass over them, hitting any structures behind them without anything, natural or artificial, absorbing their energy. The abrupt shallowing at the tube can cause the waves to break on top of them, propelling fast-moving water directly onto beach houses, concrete slabs, and other structures directly behind them.

The Effect of Hurricane Ike Along the Bolivar Peninsula
Eventually, a storm did strike the Upper Texas Gulf Coast so as to inflict the damage that would be expected along a transgressive coast lined with geotextile tubes. Hurricane Ike made landfall in Galveston, Texas in September 2008 as a Category 2 hurricane. But, the storm's size, angle of approach to the coastline, and time of landfall relative to the tides, caused its storm surge to be comparable to that of a Category 4-5 hurricane (Ashmore, 2008). Along the Texas coast, east of Galveston, the peak storm surge was in excess of 15 feet. In the Gilchrist and Caplen areas, all structures, except for one newly constructed home on high piers that was heavily damaged, were destroyed between Highway 87 and the geotextile tubes (Fig. 2). In addition, because the tubes were easily breached during Hurricane Ike, backflow of the storm surge was concentrated at eroded gaps in the tubes, cutting numerous channels several feet deep into the beach sand, including the compacted clay beneath the sand, greatly increasing erosion (Fig. 3). Geotextile tubes placed along the Bolivar Peninsula gave residents a false sense of security and greatly enhanced the destructive power of Hurricane Ike's storm surge waves. In the area of Caplen, west of the tubes, many more beach houses and slabs survived because there were no tubes to alter the natural geomorphic shape of the beach profile and enhance destructive effects of Hurricane Ike's storm surge (Fig. 4).