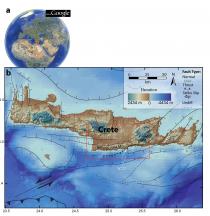 Hide
Figure 1. (a) Location map of the study area location in the Eastern Mediterranean. (b) Shaded relief map of Crete and offshore bathymetry. Major off and on shore faults are complied and modified from Chamot-Rooke et al. (2005) and Fassoulas (personal comm.). The South Central Cretan fault (SCCF) is shown in bold. Red box correlated to the map shown in figure 5 a. Details 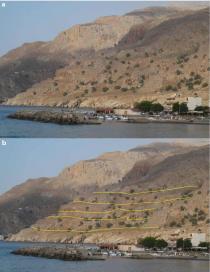 Hide
Figure 3. Photograph of a typical sequence of five marine terraces found along the south-central coastline of Crete. (a) Shows the original photograph and (b) highlights the approximate inner elevation of the five terraces. Note the stair step pattern in the landscape. The photograph was taken looking to the northwest at site 10 of this study (see Figure 5a for reference). Details

Hide
Figure 4. Correlation of the terrace sequence at site 10 (see figure 5a) to the late Quaternary global sea level curve of Lambeck and Chappell (2001) modified to correlate with the Marine Isotope Stage (MIS) boundaries of Lisiecki and Raymo (2005). The terrace sequence is anchored to the sea level high stand that occurred during MIS 3.3 by a calibrated radiocarbon age from the lowest terrace in the sequence at 27 m above modern sea level, shown as black dashed line. Higher older terraces were assigned ages correlating to sea level high stands occurring at MIS 5.1, 5.2, 5.4, and 5.5, shown as dashed blue lines. The labels t1 – t5 refer to the youngest to oldest terraces respectively. Details 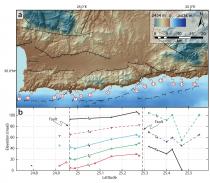 Hide
Figure 5. (a) Shaded relief map of the south-central coastline of Crete. Know (solid lines) and inferred (dashed lines) extensional faults are shown. Numbers 1 – 15 show the locations of the sites visited during this investigation. (b) Plot showing terraces elevations along the coastline from sites 1 through 15. Terraces were correlated by age with the labels t1 – t7 refer to the youngest to oldest terraces respectively. Terrace t5 formed ~ 125,000 ybp correlating the last full interglacial sea level high stand. Two extensional faults are also plotting in this figure and shown offsetting marine terraces. Note that the more easterly of the two faults is the SCCF and there is nearly 60 m of offset across this fault since ~ 125,000 ybp. Details

Introduction:
Long-lived and continuing uplift and pervasive extensional faulting are a testament to the active tectonics of the island of Crete, located in the eastern Mediterranean (Figure 1). Large earthquakes (≥Mw7) from shallow crustal faults are well documented on Crete and the surrounding region both from paleoseismologic studies (Pirazzoli, 1986) and the region's long historical record (> 2000 yrs; Guidoboni, 1994). The locations, activity, and extent of faults capable of generating such earthquakes, however, remain uncertain and the seismic hazards for the region are therefore poorly understood. For example, a large extensional fault, the South Central Cretan fault (SCCF) exists along the south-central coastline of Crete. Both the SCCF's lateral extent and late Quaternary activity are unknown (Figure 1). The eastern tip of the SCCF can be traced for ~ 20 km along the Dikti mountain front before moving offshore where it bounds the Asteroussia Mountains for an unknown distance (Figure 1). Using Pleistocene marine terraces preserved along the coastline of south-central Crete a recent study was undertaken to determine the offshore extent and test the activity of the SCCF in order to better constrain the seismic hazards it poses to the approximately 750,000 permanent inhabitants of Crete as well as the 2 million annual visitors.

Background:
Marine terraces are bench-like features found in many actively uplifting coastal settings and are an indicator of sea level at some time in the distant past. Paleo-sea level is approximated by the inner-shoreline elevation were a terrace abrasion platform meets a paleo-sea cliff (Figure 2). Periods of relative sea level stability provide the requisite length of time for wave action to cut terraces leaving behind depositional (i.e. beach and reef deposits) and/or erosional (i.e. notches and abrasion platforms) remnants of the paleo-shoreline in the landscape (Figure 2). Periods when sea level is stable relative to an actively uplifting coastline have been shown to correlate with sea level high stands that occur due to global sea level fluctuations within the Pleistocene, resulting from changes in the volume of water stored in continental ice sheets during glacial-interglacial cycles (Bradley and Griggs, 1976). As such, in uplifting landscapes a terrace is cut during a sea level high stand, abandoned when sea level falls, and as time progresses and sea level approaches another high stand, a new terrace is cut into the landscape at a lower relative elevation (Figure 2). This process repeated over multiple cycles yields flights of terraces that form a stair step pattern along a coastline with each successively higher terrace correlating to an older sea level high stand (Figure 3).

Results and Discussion:
Marine terraces are particularly useful in studies of tectonic geomorphology because they are well-suited for determining rates and patterns of uplift and quantifying vertical offset across faults. For example, site 10 of this study preserves a sequence of five Pleistocene marine terraces between 27 m and 105 m above sea level (Figures 3-5). Radiocarbon dating of in situ marine bivalves from the lowest terrace from this sequence yield corrected radiocarbon ages of ca. 50,000 ybp that we correlate to the sea level high stand at Marine Isotope Stage 3.3 (Lambeck and Chappell, 2001; Lisiecki and Raymo, 2005). It is important to note here that a radiocarbon age that is between 45,000 and 50,000 ybp is at the limits of reliability of this particular radiometric technique. Stratigraphic relationships observed in the field, however, support the timing of terrace formation at about 50,000 ybp and thus we take this radiocarbon age as credible. The total separation between the elevation at which this terrace likely formed, and its present elevation is about 75 m, which results in a mean rock uplift rate of 1.5 mm/yr over the past 50,000 years.

Age estimates of higher terraces at this site were obtained using the widely-known methods of Lajoie (1986) and Merrits & Bull (1989). A single dated terrace "anchors" a given terrace flight to the late Quaternary global sea and successively higher terraces are assigned ages through correlation to the timing of consecutively older high stands (Figure 4). This analysis revealed that the terraces in this sequence formed between ~ 50,000 ybp and the last full interglacial sea level high stand at ~ 125,000 ybp. This same analysis was conducted at seven additional sites in the foot wall block of the SCCF and it collectively reveals a westward decline in the rate of rock uplift up until site 4, where the terrace sequence is offset by another fault (Figure 5). As there are no abrupt changes in the pattern of uplift before reaching this fault, it is likely that the SCCF continues offshore for 25 km between sites 10 and 4. This evidence suggests that the full lateral extent of the SCCF may be as much as ~ 45 km.

Across the SCCF in the hanging wall, three terraces with inner-shoreline elevations at 45 m, 65 m, and 105 m above modern sea level are preserved at site 11 (Figure 5). Suitable geochronologic material was not identified from this terrace sequence; however, Angelier (1979) reports Strombus bubonius – an index fossil widely distributed in the Mediterranean during the last full interglacial sea-level high stand that occurred ca. 125,000 ybp – in the lowest terrace in the sequence at 45 m above modern sea-level (amsl). This 125,000 ybp terrace correlates across the fault to the highest terrace at 105 m at site 10 for a total cumulative offset of about 60 m since the last interglacial high stand.

Conclusions:
The investigation describe here used Pleistocene marine terraces to show that the 45 km long SCCF is active, with an inferred mean maximum slip rate of about 0.5 mm/yr. Fault length-displacement scaling relationships from historic earthquakes around the world indicate that the SCCF is capable of generating an earthquake of nearly Mw 7 (Wells and Coppersmith, 1994). Importantly, field observations shows no evidence of mid-to late Holocene rupture, which is an ominous sign as previous paleoseismic studies of similar faults in the region indicate earthquake recurrence intervals may be 5,000 to 10,000 years. Furthermore, this fault extends into the Mediterranean Sea and thus likely poses a tsunami threat to local populations. As such, this fault should be considered as a real hazard to populations on Crete as well as those throughout the Eastern Mediterranean region.

« Cracking up: emerging evidence for the importance of the sun in the mechanical weathering of rocks       Knickpoint migration and landscape evolution, Cullasaja River Basin, North Carolina »