When a tree falls in the forest, does it make a soil? 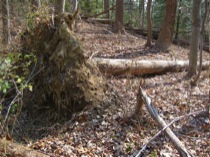 This is an example of a rootwad that was pulled out of the ground when the tree fell over. Details 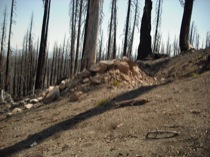 As the roots decay, the rock and soil held in the rootwad fall to the ground, creating a mound. Details

Hide
Thin soils are unable to support many trees but, when a tree falls over, a large volume of bedrock is broken up. Thicker soils can support more trees but the thick soils prevent the roots from anchoring into bedrock. Details 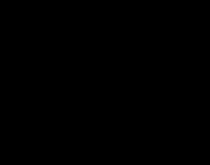 Hide
An example of a pit cut into thin soil and thick soil. When the soil is thin, more bedrock is broken up and deposited on the mound. Details

Hide
The results from a model that simulates the processes of tree growth and tree throw match actual measurements of bedrock erosion in Oregon (Heimsath et al., 2001) and demonstrate that weathering is maximized under a certain thickness of soil in forested regions. Black line emphasizes trend of model results and field data. Details

When a Tree Falls Over
A tree, like most plants, sends roots down into soil and bedrock to absorb water and nutrients. The roots also anchor the tree to the ground and prevents it from tipping over. Strong wind gusts can exert tremendous lateral forces against trees. If the trees are young (less than 100 years old), the trunks may snap. Older trees with larger trunks usually do not snap but, if the wind is strong enough, the trees may be uprooted. When a tree is uprooted, the roots and the soil and bedrock to which the roots were attached are ripped up out of the ground (Figure 1). This mass of root, soil, and bedrock is called a 'root-wad' and the event is called a 'tree-throw.'

The removal of the rootwad from the ground leaves behind a pit that can be several meters across and 1-2 meters deep, depending on the size and species of the tree. Over a period of about 10 years, the rock and soil held in the rootwad falls to the ground as the tree roots decay and release their grip. This process of deposition creates a mound. Because pits and mounds are found together, they create 'pit-and-mound topography.' Pit-and-mound topography is familiar to anyone who has walked through forests (Figure 2).

Breaking Bedrock
The process of breaking down bedrock to create soil is called weathering. Weathering is caused by chemical processes that chemically alter or dissolve bedrock and by physical processes that break big chunks of bedrock into smaller pieces. GK Gilbert (Gilbert, 1877) was one of the first scientists to think about the controls on weathering and he proposed that weathering rates should be dependent on soil thickness. Specifically, he hypothesized that weathering should proceed slowly on bare bedrock surfaces, increase to a maximum rate in intermediate soil thicknesses, and then decline as soils continue to thicken. This type of 'humped' function would seem to agree well with how biological processes, such as tree throw, might break up bedrock (Gabet et al., 2003).

Because bedrock surfaces are unable to retain much moisture, they are inhospitable to plants and, thus, few trees are able to grow on them. As the soil thickens, more and more trees are able to grow, leading to a positive relationship between soil thickness and tree density (Figure 3). In contrast, there is a negative relationship between soil thickness and the amount of bedrock disrupted by each tree throw event. On bedrock surfaces, the roots are embedded into bedrock and, thus, the rootwad is primarily composed of fresh rock fragments. As soils thicken, bedrock constitutes an increasingly smaller proportion of the rootwad (Figure 3). In soils that are thicker than the rooting depth, no bedrock is disrupted (Figure 4).

Modeling Tree Throw
Because of the long time spans involved, it is difficult to observe how physical weathering by tree throw might be related to soil thickness. Computer models, however, let us speed up these processes. A computer model was developed by incorporating the simple relationships shown in Figure 3. The model 'seeds' a digital hillslope, tracks where trees grow, and blows them over. Where a tree is blown over, the model removes an appropriate amount of bedrock and converts it into soil (see animation). By running the model for 10,000 years, we can observe how the rate of physical weathering is affected by soil thickness.

Figure 5 shows the results of the model and compares them to actual rates of bedrock weathering measured with cosmogenic isotopes. The results are important for two reasons. First, the results confirm GK Gilbert's hypothesis regarding weathering and soil thickness: weathering rates are low under thin soils, reach a maximum as soils thicken, and then decline as soils become even thicker. Even though, on thin soils, each tree throw event removes a large portion bedrock, there are not enough trees growing to do much weathering. Thick soils can support many trees but, because tree roots have only a limited vertical extent, each tree throw event disrupts little or no bedrock. Between these two extremes lies a middle ground where weathering rates are at a maximum. Second, these results are important because they match very well measured rates of bedrock weathering, suggesting that tree throw is the primary mechanism for breaking up bedrock in forested regions. In other words, without trees and tree throw, soils would probably be much thinner.

The Co-Evolution of Trees, Thick Soils, and Land Animals
Over long time scales, the thickness of the soil at a particular location reflects the balance between weathering processes that create soil and erosional processes that remove soil. Modern trees evolved 370 mya (Meyer-Berthaud et al., 1999), during the Devonian, and presently cover about one third of the Earth's surface. Before trees, bedrock weathering likely was too slow to keep up with erosion in hilly terrain and these slopes were probably only mantled by thin soils. The advent of trees and tree throw would have led to the formation of thick soils in these landscapes and created new niches and habitats to be exploited by new species of plants and animals.

« Soil flowed over the slopes of KwaZulu Natal in South Africa about 30,000 years ago       The role of hydraulics in fine-grained sedimentation within river channels: an example from the Ovens River, Australia »