Overview of Southern Africa, Kwa Zulu Natal and the location of the study site Details 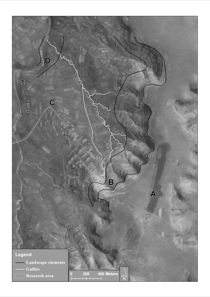 Hide
The predicted landscape change (erosion in brown and yellow, and deposition in green) at the year 3000 under changed (left) and stable climate (right) Details

Predicting the effect of changing climate on landscapes with computer based landscape evolution models.

Landscape evolution models and their problems

Computer-based geomorphological models are the only tools available for simulation of landscape change--be it due to climate change, human activity or tectonics. These models, also known as Landscape Evolution Models (LEMs, Coulthard, 2001) calculate landscape change as the sum of contributions of multiple, interacting landscape processes like erosion, deposition and landsliding. Topographic variables are important factors in such calculations, usually in the form of Digital Elevation Models and derived variables such as slope or curvature.

The use of LEMs to quantify climatic influence on future landscape dynamics is problematic. To start with, equations for use at catchment or larger spatial extent are necessarily strong simplifications of real world processes (Brasington and Richards, 2007). Parameters for these simplified computer formulations often lack real-world significance. They can therefore not be measured and must be estimated through model calibration. LEMs can only be calibrated by looking at erosion, deposition and weathering in the past, preferably in the same landscape. For such retrospective calibration, data availability is very limited. Finally, model input data may have large uncertanties.

In other words, despite their potential (Van de Wiel et al., 2007), we do not really trust LEMs as tools for prediction. It is therefore impossible to use them to assess the exact effect of future climate change on landscapes. However, what we can do, is check whether our (uncertain) predictions for stable climate and predictions for changed climate differ significantly. If they do, we are sure that climate change causes landscape change--although we remain unsure how much change.

To find out whether stable and changed climate predictions differ significantly, a study site is needed. One of the rare existing retrospective LEM studies was done by Temme and Veldkamp (2009) for the last 50.000 years for Okhombe valley in KwaZulu-Natal, South Africa. Okhombe valley has horizontally stratified sandstone and mudstone lithology and is in the foothills of the Drakensberg which means warm and humid summers and cold and dry winters, with snow in the typical year (see figs). Okhombe valley serves as a model for many similar valleys in the Drakensberg foothills that--densely populated and intensively used for agriculture--deal with problems like erosion and loss of (ground)water resources. Their shared landscape trajectories are of direct interest to the livelihoods of the population.

For Okhombe valley, predictions of landscape change (i.e. the amount of erosion or deposition) were now made for the next 1000 years under stable and (predicted) changed climate. Climate is predicted to gradually become warmer and more humid over the next 1000 years.

The LEM that was used is LAPSUS (Schoorl et al, 2002). Combining up to eight landscape processes, LAPSUS was used in this study to simulate overland erosion and deposition, creep, solifluction, biological and frost weathering--and their interactions.

LAPSUS was run about one hundred times for both stable and changed climate, each time with different parameter settings that were drawn randomly to reflect the uncertainty in the model. (This repeated running with random parameters is called the Monte Carlo method.) Averages and standard deviations for the one hundred model outputs were calculated and a statistical test (the T-test) was used to see if the set of one hundred outputs under stable climate differed from the set of one hundred outputs under changed climate.

Results showed that this difference exists. For the study area as a whole, and for seven smaller zones within it, predictions of landscape change under stable climate are statistically different from predictions of landscape change under changed climate. The probability that there was no difference in the landscape as a whole under stable and changed climate at the year 3000, was about 0.01 % . For most of the subzones, this probability was even several orders of magnitude lower (for instance one millionth of a percent--effectively zero).

Our figure shows the predicted average altitude change for the study site between the year 2000 and the year 3000. Erosion is more widespread under changed climate (left) than under stable climate (right), although erosion on the steeper slopes decreases. Redeposition in the flat, low areas also increases under changed climate, although not in all positions.

For this study site, LEM LAPSUS is apparently well able to make statistically different predictions for stable and changed climate at the year 3000. However, we obviously also have an keen interest in changes in the nearer future, let's say up until the year 2100. With landscapes under stable and changed climate diverging into the future, it is to be expected that it is more difficult for LEMs to make statistically different predictions at the shorter term.

A repeat study with LAPSUS indicated that this increased difficulty exists, but only to a small degree. For instance, at the year 2100, the probability that there is no difference between landscape change under stable and changed climate is still less than 0.1% for the study area as a whole and the seven subzones. The pattern of predicted change remains the same: also at the year 2100, erosion is more active under changed climate.

This study shows that even though our predictions of future landscape change are made with uncertain models, we can use simple statistical methods to assess how sure we are of different landscape activity under predicted changed climate. A major requirement for such studies is the availability of data on landscape change (erosion, deposition, weathering rates) from the past. When such data are available, our models can be calibrated in the past to predict for the future. For the study site in South Africa, which is currently struggling with strong erosion, the message is not positive: stronger erosion is likely under predicted future climate change.