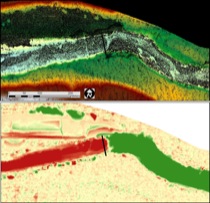 Hide
Figure 1: The top figure shows a DEM (Digital Elevation Model) derived from airborne LiDAR data collected in October 2008. The black dots show the location of points returned from the laser. Note the higher point density in the unvegetated areas. The bottom figure shows differences in elevation between the Fall 2007 (pre-dam-removal) LiDAR and the 2008 (post-dam-removal) LiDAR. Red values depict deposition (higher in the second year) and the green values depict erosion (lower in the second year). The black line is the location of the former dam. Details

Hide
Figure 2: The two types of topographic surveys of the Sandy River near the site of Marmot Dam are shown overlain on a 2008 (post-removal) aerial photograph. The blue points are fixed cross sectional surveys, which have been repeated annually. The orange points are event-based topographic surveys that map out significant features such as water's edge, slope breaks, etc…; the dark orange lines connect points that trace common features. The black line is the former location of the dam. Details 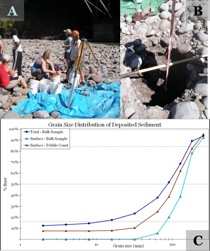 Hide
Figure 3: Representative bulk samples and surface pebble counts were made of the new deposit below the Marmot Dam site. Between 1500 and 2500 kg of sediment were excavated from each (approximately 1 m3) sampling pit (Figure 3B), and field-processed by sieving and weighing each size class (Figure 3A). From these data, grain size distributions (Figure 3C) were computed for the surface layer as well as the entire (surface + subsurface) bulk sample. In this pit, the surface is coarser than the subsurface, and the pebble count yields a finer measure of the surface than the bulk sample. Details 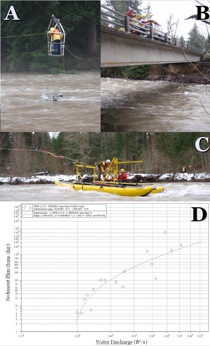 Hide
Figure 4: Samples of bedload and suspended load were obtained from several locations along the river from a cableway (A), a bridge (B), and a cataraft (C). Various types of samplers were used to collect the different types of sediment in motion and water discharges. For each sediment sampling location, a unique rating curve (D) was generated, expressing a relationship between water discharge (on the x-axis) and sediment flux (on the y-axis). Details 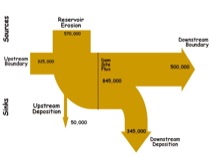 Hide
Figure 5: A budget for the first year following the Marmot Dam removal is shown (values are in metric tons). The arrow thicknesses are scaled to the mass of sediment for each component. Sediment comes into the system from upstream (the left side) and from erosion (the top) and leaves the system downstream (right side) and through deposition (the bottom). Details

Rivers transport both water and sediment [rock fragments such as sand and gravel] from hillsides to the oceans. As sediment moves downstream it creates river bars, accumulates into floodplains, and often forms the bed of a river itself. One way to track the movement of sediment in a particular area is through a sediment budget. This is an expression of the conservation of mass for a reach [portion] of river, in which the difference between the sediment fluxes [rate of flow through a surface] into and out of the reach are balanced by a change in the mass of sediment stored within the reach. A sediment budget is not unlike a piggy bank--the change in value (storage) is determined by the difference between deposits (flux in) and withdrawals (flux out). An example of the application of a sediment budget comes from the 2007 removal of the Marmot Dam from the Sandy River, Oregon (described in the vignette titled An Example of One River's Response to a Large Dam Removal). The budget is presented here to provide a brief overview of the data collection and synthesis used in the construction of a sediment budget.

To calculate changes in sediment storage, measurements of topography were made at multiple points in time using several instruments. Airborne LiDAR [Light Detection And Ranging] is a method of collecting large amounts of topographic data from a landscape using a laser system. An airborne platform flies multiple 'swaths' across the area of interest from an altitude of several hundred meters. By using records of the aircraft's GPS [Global Positioning System] location, the angle of the laser, and the time for the laser pulses to return to the aircraft, a set of spatial coordinates for the surface of interest is generated. For the Sandy River, there were multiple pre- and post-dam-removal LiDAR flights flown from 10 km upstream to 48 km downstream of the dam, measuring at least 2 km on either side of the river (Figure 1 shows a portion of the data collected).

In order to measure bathymetry [underwater topography], two types of ground surveys with different methods of selecting points were made (Figure 2). The first type was a cross-section-based survey using fixed reference points, allowing comparisons from one survey to the next. Points were selected along each cross section so as to define the channel geometry. This type of survey resulted in an average point density of one point every 2.4 m for cross sections spaced an average of 13 m apart (on a river with a width of 20-40 m). The second type of survey involved tracing features of geomorphic significance such as tops of banks, channel thalweg [path of the deepest flow], and the water's edge. Cross section surveys were repeated annually from 2005 through 2009, while the topographic surveys were opportunistic and based on the occurrence of large storms and the low-water season.

Spatial coordinates from LiDAR and ground surveys were interpolated to create digital elevation models [DEM]. Topography changes (height and volume differences) between surveys were identified by subtracting respective DEMs. A 5-km-long reach approximately centered on the dam site was mapped using a combination of ground surveys and LiDAR, then values of sediment erosion and deposition, reflecting the spatial and temporal changes in storage, were derived (Figure 1).

In addition to measuring channel shape, the channel-bed texture (or grain size distribution [GSD] of the bed material) was measured. Because different grain sizes (for example sand [0.0625-2 mm] and gravel [2-64 mm]) interact with the river bed differently, the budget accounted for various size classes separately. Two types of grain size measurements were made. First, facies [areas perceived to have the same GSD] on the bed surface were mapped, and a pebble count [size measurements of a random sample of grains from the surface] was conducted. Second, a bulk sample (Figure 3) involved excavating a pit, then sieving and weighing the excavated sediment (1500-2500 kg). The results (Figure 3c) show armoring [a surface layer coarser than the subsurface layer] and a pebble count (GSD by area) that differs slightly from the surface bulk sample (GSD by weight), both of which are typical findings when comparing GSD computed from bulk samples and pebble counts.

The other part of the budget is the measurement of fluxes in and out of the reach. The bed of the Sandy River is composed primarily of sand and gravel. Bed material moves down the river both as suspended load [carried in suspension throughout the water column] and bedload [moving in near-continuous contact with the bed surface]. On the Sandy River, the high-discharge flows that move most of the bedload occur throughout the winter. Samples were taken during most of the high-flow events for the first two winters following the dam removal at multiple locations along the river (Figure 4) which allowed measurements of sediment moving into and out of the dam area. At each site, suspended sediment and bedload samples were collected concurrently with measurements of water discharge to produce paired values of sediment flux and water discharge. A regression curve was fit to the discharge / sediment transport relationship (Figure 4D) at each site. This regression relationship [rating curve] was used with a continuous record of water discharge at each site to calculate the annual sediment load at each site.

« An Example of One River's Response to a Large Dam Removal       Eolian Landforms and Deposits of the Eastern Snake River Plain, Idaho »