Soils, relict landscapes and paleoclimate in the Atacama Desert, Chile 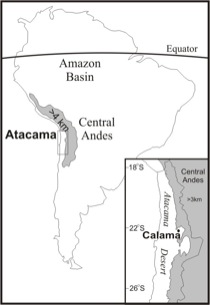 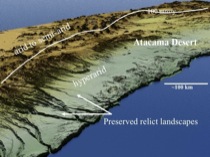 Hide
Figure 2 Digital elevation map of the Chilean Atacama Dessert and Central Andes(After R., Allmendinger). Image displays extensive geomorphic surfaces in the Atacama that have been abandoned by the deep incision of streams draining the Andes. Details

Hide
Figure 3 Photograph of relict fluvial landscape surfaces (top of Mesas) in the Pampa de Tana. These surfaces are about 10 million years old and are capped by thick gypsum-cemented soils. Details 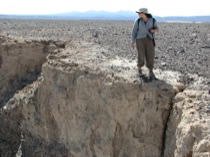 The exceptionally dry Atacama Desert, adjacent to the Central Andes in northern Chile, contains many relict landscapes (landscapes formed in the past, but preserved on the present surface; Figure 1). One remarkable aspect of the relict geomorphic surfaces in the Atacama is their age. Whereas most relict landscapes on Earth are typically hundreds of thousands to a few million years old, relict surfaces in the Atacama can be as old as 10 to 15 million years. These preserved landscapes are important because they can be used to understand the geomorphic evolution of a region (Mortimer, 1973), infer rates of tectonic uplift (Hoke and Garzione, 2008), and to reconstruct past environmental and climatic conditions (Brock and Buck, 2009).

The preservation of relict landscape surfaces in the Atacama Desert is the result of the uplift of the Central Andes and the hyperarid climate in the Atacama. The uplift of the Central Andes caused the deep incision of streams and the abandonment of former stream landforms. Once removed from fluvial modification by streams draining the Andes, these landscapes were preserved as arid environments are prone to considerably less erosion and weathering than wet, humid environments (Figures 2 & 3). Therefore, the extreme aridity of the Atacama Desert has left many of these landscapes unaltered since their formation.

Relict landscape surfaces, which have not experienced considerable erosion or geomorphic modification, are generally capped by thick soils (e.g., Brock and Buck, 2009). These soils reflect the main soil forming factors (climate, organisms, relief, parent material, time) during their development, and therefore can be used to infer past climatic and environmental conditions (e.g., Brock & Buck, 2009). This is especially true when it is possible to compare soils of various ages in a region.

Our research on relict landscapes in the Atacama Desert focused on the Pampa de Tana region in northern Chile, between the deeply incised rivers of the Quebrada de Camarones (~19°15'S) and Quebrada de Tana (19° 30'S). This landscape surface has been dated to between ~12 and 9 million years old (Mya) based on radiometric ages (40K/40Ar) of volcanic ashes interbedded in the underlying strata, as well as lavas atop the landscape surface. However, many parts of the relict landscape have been altered by geomorphic activity since their formation. Our research objectives were to map the ~10 Mya unaltered relict landscape surface, and by examining soils on geomorphic surfaces of various ages, develop an understanding of the climatic and environmental changes since the formation of this landscape (i.e. the last 10 million years).

The ~10 Mya relict landscape surface on the Pampa de Tana is capped by a thick (~4m) gypsum-cemented soil (Figure 4). We mapped the relict landscape surface based on the presence of this distinct soil at the surface. As gypsum is a very soluble salt, we can infer that hyperarid conditions have persisted in this region since the formation of this landscape surface. Otherwise, we might see features in the soil that formed under wetter conditions, such as the accumulation of clay minerals and calcium carbonate. We see no evidence of these features or other indicators of wetter climatic conditions preserved in this soil.

The gypsum-cemented soil is also buried in some places by landslide deposits and fluvial deposits that are between ~8 to 5 Mya (Figure 5). Therefore, in these places the soil is a paleosol (fossil soil), which has not been influenced by soil forming factors over the last 5 to 8 Ma. Remarkably, the cemented gypsic soil looks almost exactly the same in places where it has been buried for 8 to 5 million years as it does in places where it is still exposed! This tells us that the majority of soil formation occurred during the early history of this soil, and that it is essentially a relict soil.

In other places, the relict landscape surface has been eroded or buried by younger Quaternary stream deposits and younger soils (Figure 5). Chemical and mineralogical analysis of these soils shows that they contain gypsum, but also contain higher concentrations of halite and other saline minerals that are more soluble than gypsum. This may suggest that this region of the Atacama has become more arid over the last few million years.

Our analysis of the soils on the relict landscape surfaces of the Pampa de Tana indicate that this landscape has been extremely dry and unvegetated since its formation ~10 million years ago. Soils of various ages, from >8 Ma to modern, show no evidence of accumulation of clay minerals or accumulation of calcium carbonate, clear indicators of semi-arid conditions in a vegetated landscape (Rech et al., 2006). Instead, we see soils cemented almost entirely with gypsum. In the modern Atacama Desert, gypsum-cemented soils are restricted to areas that receive <3 cm of precipitation per year! We also see that the abundance of more soluble minerals such as halite increasing in the younger soils, suggesting that climate might be getting drier!