Native animals and the formation of healthy soils 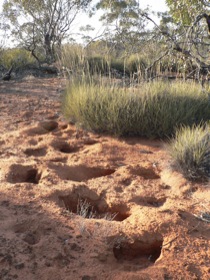 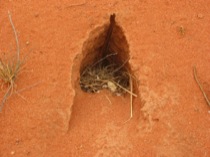 Soil is an important resource on which most of the world's production depends. Soil is not an inert medium; it is a living and breathing ecosystem made up of water, air and organic material. Soil provides the structure for plants to grow in, habitat for a host of small animals, and a store of water and nutrients. Like all important resources, soil is not limitless. But where does soil come from?

Soil comes from the slow breakdown of rocks over time. In most environments, except for perhaps tropical rainforests, this rate of formation is extremely slow. In fact, it is fairly true to say that the rates of soil formation are orders of magnitude less than current rates of soil erosion. In other words, we are losing more soil than we are producing and this cannot be sustainable in the long run. A lot of factors contribute to soil loss; poor farming practices, often combined with drought, excessive clearing of forests, overgrazing, burning, the list goes on. The conversion of marginal grazing land to cropland often leads to increased erosion and the loss of productive topsoil. Nowhere is this more apparent than in the world's semi-arid drylands, where suitable soil for farming is scarce, and where rainfall is both low and highly variable.

In the middle of the 20th century a soil scientist Hans Jenny outlined his ideas on the main factors responsible for soil formation. These are parent material, climate, topography, biota and time (Jenny 1941). In comparison to some of the other soil forming factors such as climate and parent material, there is still relatively little known about the importance of organisms in soils. Most soil scientist recognize, however, that organisms play a significant role in soil formation.

If you take a close look at even a small cup full of soil under a microscope you will see that it is teeming with life. It will contain millions of bacteria, fungi and protozoa, thousands of arthropods and nematodes, and even the occasional earthworm if you're lucky. We have known about the importance of earthworms for building healthy soils ever since Charles Darwin published his famous book 'The formation of vegetable mould through the action of worms, with observations on their habits' in 1881.

Research over the past couple of years has shed some light on the roles played by animals in soil formation and their importance in developing healthy soils. Invertebrates such as ants, termites and beetles move huge quantities of soil to the surface when they construct their underground tunnels, burrows and storage galleries. This soil is often high in carbon and nitrogen, nutrients that are critically important for plant growth. The soil is not well compacted, doesn't really stick together well, and so it is easily blown around by wind and moved by water. This redistribution can result in soil loss, but it also brings soil into contact with plants and helps to build up soil profiles. In fact, the movement of soil by some ants can results in the buildup of about 1 cm of soil every ten years, or a metre every thousand years (Eldridge and Pickard 1995).

Small native mammals such as rodents, bandicoots and even echidnas move substantial amounts of soil when they forage in the soil. In semi-arid Australia the mass of soil contained in the mounds and pits constructed by a range of soil disturbing animals ranges from 0.1 to 6 tonnes per hectare. Even seabirds such as shearwaters move huge amounts of soil, more than 10 tonnes per hectare per year when they construct their burrows, and birds such as the lyrebird and brush turkey that inhabit wet forest can move up to 200 tonnes per hectare per year when they are foraging for food (Eldridge and James 2009). These very high rates of soil movement suggest that animals have substantial effect on surface soils and help to build up rich soil profiles.

But soil formation is about more than just moving soil around. The effect of this soil movement and surface disturbance is to create opportunities for plants which often leads to the restoration of degraded lands. Soil disturbances are important because the small pits and depressions created by animals become traps for litter. The pits also catch water, and studies worldwide have shown that pits trap not only more water, but that the water remains in the pits for longer. With more water and more organic matter, these small depressions soon become perfect sites for microbes, which quickly break down the litter, releasing nutrients like carbon and nitrogen.

The depressions also catch seed, and with a moister soil with greater levels of nutrients, the plants that germinate generally have greater survival. Some of these plants are those that are preferred food items for the animals that originally constructed the pits, and when they re-excavate the pits to expose the nutrient-rich plant roots, the whole process starts over again.

Unfortunately, many of the native soil disturbing animals have been lost over large areas of the Australian continent. This means that we have also lost those services that these animals once provided, what we call 'ecosystem services'. Instead, many of the once common native animals such as bilbies and bettongs have been replaced by the invasive and exotic European rabbit. Rabbits also dig in the soil, but unlike native animals, they don't dig enough, and they have many other negative effects on the environment.

Some environmental groups are reintroducing locally-extinct species back into environments where they were once plentiful before European settlement. This is likely to have major benefits not just for nature conservation, but also for rebuilding damaged ecosystems. These animals are critically important for building up healthy soils and maintaining diverse plant communities, and probably for other important services that we are only just beginning to realize. Is up to all of us to find ways of protecting and enhancing native animal populations because of the amazing environmental services that they provide.