Fig. 1. Overview of the glacier and moraine-dammed lakes in the Hindukush-Karakoram Mountains Details 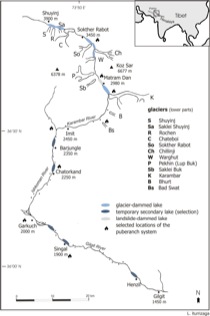 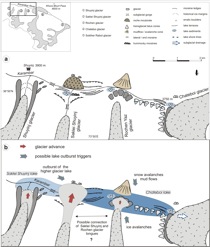 Hide
Figure 4. (a) Geomorphological map of the lake basins of the glacier dams Saklei Shuyinj and Chateboi (based on field observations in the years 2002 and 2004). (b) The glacial situation at about 1900 with the potential ice-dammed lakes. Details

Glacier lake outburst floods in the Hindukush-Karakoram Mountains are among the most important types of current geomorphological processes below an altitude of 4500 m. Since 1826, at least 35 glacier lake outbursts have been recorded in the upper Indus catchment area, in which 12 glaciers were involved (Fig. 1, Hewitt 1998). The glacier lakes are mainly the result of the blockage of the main river by advancing tributary glaciers, flowing down from catchment areas of over 7000 m into the semiarid valley floors at about 3000 m. Due to the high discharge rates of the rivers, large-sized lakes, several kilometres in length, can be impounded over a very short time period. The lakes exist only for some months or at most some years. The failures of the glacier lakes occur often periodically and in general between July and August during the time of the highest discharge. Three localities have been notorious for glacier lake outbursts in the last two centuries in the Hindukush-Karakoram: the tributary glaciers of the Shyok valley (East Karakoram, Mason 1935), the Shimshal valley (North-West-Karakoram, Iturrizaga 1997, 2005a) and the Karambar valley (E-Hindukush, Iturrizaga 2005b,c, 2006). The Karambar valley shows one of the highest concentrations of potential glacier dams and had been selected for a case study for demonstrating paradigmatic characteristics for reconstructing former glacier dams and the impacts of multiple glacier lake outbursts.

The 90 km long Karambar valley is situated in the Eastern Hindukush (36°30'–36°45' N/73°45' –74°10' E) with the Kampir Dior (7168 m) as highest peak of the catchment area. The glaciers are avalanche-fed glacier types and their lengths range between 4 and 23 km. The corresponding glacier dams are located at altitudes between 2830 and 3850 m (fig. 2). Most of the Karambar dams are framed by lateral moraines up to 250 m in height. At least six major flood events occurred in the years 1844, 1860/1861, 1865, 1893, 1895 and 1905 in the Karambar valley, from which the 1905-flood supposed to be one of the most disastrous outburst events. Previously the lowermost and best accessible glacier dam, the Karambar glacier, was primarily made responsible for the outbursts (Photo 1), but the field investigations revealed a different scenario: Nine tributary glaciers in the Karambar valley have blocked the main valley in former times (Photos 2-4). Among them, six glaciers impounded lakes since the mid of the 19th century, which drained catastrophically from time to time.

Glacier-dammed lakes rarely deposit lake sediments because the sedimentation time is comparatively short. Therefore the reconstruction is based on travel reports of early researchers and interviews with local inhabitants. The glacier lakes reached a length of up to about 5 km and more and an estimated volume of about 100–150 x 106 m3. Within the Chateboi lake basin, another remarkable dam was identified which played a crucial role in the lake outburst history of the Karambar valley. A small hanging glacier, the Saklei Shuyinj glacier, has blocked as well the Karambar valley in historical time (Fig. 4, Photo 5). At present the glacier tongue is located about 2 km from the left Karambar valley flank on a confluence step.

The Chateboi glacier even blocks the Karambar today over a distance of 4 km and forms small sized lakes from time to time. When a glacier blocks a valley, the river does not necessarily have to be dammed. The river can drain over long periods subglacially. Repetitive outbursts are common for ice-dammed lakes.

The runout distances of the floods, reconstructed by local reports about damages of settlement areas, measure about 120–150 km. The 1905-Karambar flood caused a 7 m high flood level above the normal level and several bridges were destroyed. The dense concentration of the glacier dams along a horizontal distance of only 40 km results in a complex interfingering of lake basins and flooded valley sections. In the individual flood events were involved almost synchronously the drainage of at least two lakes resulting in a lake outburst cascade. The geomorphological impacts of the floods are well visible downstream of the glacier dams. The broad gravel floor, up to 2 km in width, shows imbricated boulder clusters, with individual boulder sizes of up to 2 m in diameter, indicative for high-energy fluvial transport processes. The boulder size decreases gradually downstream. The abundant occurrence of unconsolidated sediments mantling the valley flanks cause a high sediment load and enhanced the erosion potential of the flood. The erosion cliffs of sediment cones, up to 100 m high, wash limits along the slopes and longitudinal bars in the gravel floors are main characteristics of the flood landscape.

During the flood, backwater lakes formed at valley constrictions at several locations, even about 100 km downward of the glacier dam. These temporary lakes can be caused by fluvial undercutting of the slope sediments generating landslide-dammed lakes. Due to the high sediment concentrations, the flood waters themselves might form temporary blockages at narrow sections in the valley course. Downvalley, the topographical setting of the Karambar valley alternates between expansive, basin-like valley sections and narrow gorge-like valley sections, providing favourable conditions for temporary lake formation by producing a bottle-neck effect for the flood masses. Eroded wood lands in the flood plain provide further material for a jam of the flood waters. Moreover, the glacier tongues of the tributary valleys which project into the main valley cause themselves obstructions to the flood waters. The gap between the glacier tongue and the opposite valley flank measures at the narrowest point only about 50 m. Consequently, a high amount of sediment can be taken up by the flood waters, transforming it more and more to a debris flow. The flood waters of the higher glacier lake are then abruptly backed up by one of the lower glacier dams leading to temporary lake formations. Geomorphological evidences for these processes are ripple marks and eddy bars in the lake basins. The temporary lakes can in turn also drain abruptly causing small-sized floods.

In order to warn the villagers living downstream, the Karambar people established an early warning fire system (Puberanch) which was operated until 1905 (Fig. 2). On good visible hill sides in an altitude of up to 4000 m a.s.l., local posts were set up, in order to sent fire signals to the lower posts down to Gilgit over a horizontal distance of over 100 km.

To sum up, the overall occurrence of the formation of glacier-dammed lakes has decreased in the course of general glacier shrinkage in the Hindukush Mountains during the last century. However, glacier surges and rapid glacier advances present a high and unpredictable hazard in this region, as many glacier tongues are located in close vicinity of confluence areas and might suddenly block the main valley.

Fig. 5. Photos of selected glacier dams in the Karambar valley and their lake basins.

Iturrizaga, L. (1997): The Valley of Shimshal - A Geographical Portrait of a Remote High Mountain Settlement And Its Pastures with reference to environmental habitat conditions in the North West Karakorum. In: GeoJournal (M. Kuhle, ed.) Tibet and High Asia IV, vol. 42, 2/3, July, 305-328.

Iturrizaga, L. (2005b): Historical ice-dammed lakes in the Karambar valley, Hindukush (Pakistan). In: GeoJournal (M. Kuhle, ed.), Tibet and High Asia (VII): Glaciogeomorphology and Former Glaciation in the Himalaya and Karakorum, Vol. 62, no. 3-4, 1-47.