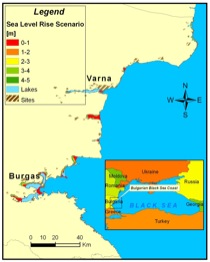 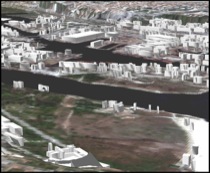 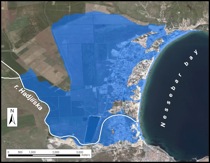 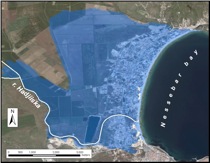 Over recent decades the increased frequency of natural hazards resulting from global climate change has become one of the most severe problems affecting sustainability of costal zones. In particular, low-lying areas which are strongly damaged by flooding and coastal erosion, pose the most serious consequences for the sustainability of coastal systems and public safety (Szlafsztein, 2005). Furthermore, these problems have been exacerbated due to rapidly growing coastal population pressure, leading to poorly planned development of the hazard-prone areas. Most vulnerable are those systems with highest sensitivity and lowest adaptability to climate change effects, including low-lying coastal areas, sandy coasts, dunes, marshlands, lagoons, firths, deltas, etc. (Klein and Nicholls, 1999; IPCC, 2007). An additional factor that contributes to vulnerability of coasts is a land subsidence, caused by tectonic vertical land movements. Such low-laying areas are also most attractive and productive environments (Nicholls, 2002) both for settlements and human activities, because they offer a great variety of possibilities for better livelihoods, easy access to the sea and recreation. These settings make even more important the efforts to identify coastal areas with high priority of risks to sea flooding.

The Bulgarian Black Sea coast has a length of 412 km, as 58% of it is exposed to coastal erosion and landslide processes (Stanchev, 2009; Peychev and Stancheva, 2009). These natural processes have been aggravated by increasing anthropogenic impacts associated with accelerated urbanization and human influence along the coast. There are 14 Bulgarian Black Sea coastal municipalities which comprise about 5 % from the entire territory of the country and hosted about 9 % of the national population.

Coastal units potentially vulnerable to the impacts of sea level rise along the Bulgarian coast are firths, lagoons, sandy beaches and dunes often being also under subsidence processes. The contemporary subsidence land movements constitute about 1/3 of the entire coast. The most intensive subsidence rates have been estimated at firths and lagoons at the South Bulgarian coast, as values vary from 0.8 mm/y to 3 mm/y at some firths, while in the region of the Burgas lakes this rate reaches even 5 mm/y (Keremedchiev and Stancheva, 2005). Firths and lagoons are typical of the Bulgarian coastal zone. Firths are old river valleys drowned during the Holocene. The number of firths and lagoons are 26 and 5 respectively (Dachev, 2000).

Long-term sea level changes along the Bulgarian Black Sea coast have been traced for more than 100-year period. Based on the records of two marine stations, located at towns of Varna and Burgas, a continuous sea level increase has been found, particularly over the last few decades. Natural and anthropogenic factors are pointed out as the main causes for accelerated sea-level rise. The natural factors contributing to sea level rise include changing river discharge into the Black Sea, rainfall-evaporation balance, water exchange through the straights linking the Black Sea to the Mediterranean (Dachev, 2000) and subsidence of the land. Anthropogenic factors affecting sea level changes are: urbanization, dam and reservoir buildings, groundwater mining, deforestation, etc. The mean values of average sea level rise for the Western part of the Black Sea vary between 1.5 mm/y and 3 mm/y (Pashova and Jovev, 2007). Although such rates are not dramatic for the Bulgarian coast there would be a case of sudden sea level rise under extreme storm conditions.

In contrast to climate change-induced sea level rise, which can be predicted over a long-term scale (100 years), the extreme sea level increase associated with storm surges, tsunamis and rain-storms could have a short, but particular devastating impact on coastal areas. Significant coastal changes typically occur during such extreme events, causing more intense coastline retreat and beach erosion (Ashton et al., 2007; Boyd et al., 2002). As a consequence, functions and values of the coastal systems could be degraded, and public safety and economy could be affected (Szlafsztein, 2005). Coastal storms are extreme meteorological events that mainly occur along the Bulgarian Black Sea coast in winter with the strongest N and NE winds. Examples of such extreme events along the Bulgarian coast are:

Extreme wind waves are the main cause of flooding in low-lying coastal territories. These also cause increased salinity in most coastal firths and intrusion of seawaters into fresh groundwaters, the activation of erosion and landslides. The central parts of the Bulgarian Black Sea coast are mostly affected by salinization (Dachev, 2000).

To indicate low-laying territories potentially vulnerable to flooding due to extreme sea level rise along the Bulgarian coast, 1:50 000 topographic maps were used (Palazov and Stanchev, 2007). Maps processing includes a series of steps: scanning, geo-referencing and digitizing with help of Geographic Information System (GIS) ArcInfo 9.2. The following approach was used: extreme sea level rise scenarios from 1 to 5 m with interval of 1 m were assumed on the basis of historical background and data collected over a 100-year period (Fig. 1). The performed analysis shows that 14 towns, 17 villages, 13 sea resorts and 7 small campsites would be potentially flooded by extreme sea level rise of 5 m. Number of affected coastal population counts almost 100 000 from nearly half a million residents at these sites, according to last Census data (NSI, 2001). Low-laying areas around Varna Bay (Fig. 2), Kamchia River resort, Burgas town, Sunny beach resort (Fig. 3 and 4), Pomorie town and coastal section between Albena resort and Kranevo village were identified as most vulnerable to inundation. The risk to flooding is higher in summer presumably due to greater numbers of tourists having their rest at the sea coast. In summary, about 20% (83 km) of the entire 412 km long Bulgarian coast are indicated as flood-prone territories or these are coastal units most vulnerable to inundation due to extreme sea level rise of 5 m. Total number of local coastal residents at these sites constitutes 6.93% of country's population.

Ashton, A. D., Donnelly, J. P. and Evans, R. L. 2007. A discussion of the potential impacts of climate change on the shorelines of the Northeastern USA. Mitigation and Adaptation Strategies for Global Change, vol. 13, pp. 719-743.