Glacial River Warren and the retreat of St. Anthony Falls 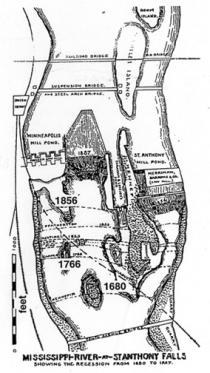 Hide
Location of major features and sites in this evaluation. Gray areas show the location of buried valleys eroded into the Paleozoic limestones and sandstones of the Twin Cities area. T.A. Hickson, after Mossler, J.H., 2000.

Hide
Figure 4. Photo of the confluence of the Minnesota and Mississippi Rivers. T. Hickson. 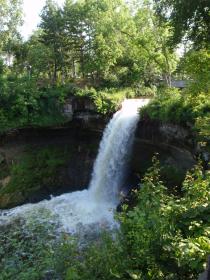 Hide
Minnehaha Falls, formed on a tributary of the Mississippi River due to the retreat of the St. Anthony Falls. These falls depict similar relationships as those that occurred at the main fall, which is now the site of a major lock and control structure. T. A. Hickson. 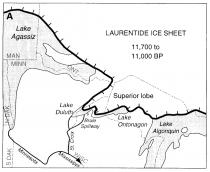 Hide
The extent of glacial Lake Agassiz at the end of the last glaciation. Wright, 1998.

In 1878 Newton Horace Winchell (Minnesota's first state geologist) estimated the timing of the end of the last ice age (Winchell, 1878). His date, about 8000 years before present (ybp), was remarkably close to modern estimates based on radiometric dating techniques (Wright, 1972), yet he accomplished this using only careful observations, clear scientific reasoning, and historical maps! Winchell's estimate was one of the first actual ages placed on a specific geological event and it happened at a time when many doubted the ancient age of the Earth. His insight into the retreat of the "Falls of St. Anthony" (Figure 1) formed the basis of this estimate.

St. Anthony Falls, as it is now called, is the only major waterfall on the Mississippi River. It is similar to Niagara Falls in that the underlying geology fundamentally controls its location. The relatively flat-lying Paleozoic Platteville Limestone, a resistant unit about 10-20 m thick, overlies a very weak St. Peter Sandstone. Before the falls were tamed by a lock and dam, the river plunged over a precipice and excavated the sandstone, forming an overhanging cliff. Fractures in the Platteville Limestone let even more water down into the St. Peter, further reducing its strength and capacity to hold up its overburden, and blocks of Platteville cascaded into the plunge-pool of the falls. Winchell's geologic mapping told him that the edge of the Platteville Limestone exposures lie downstream of the falls and he reasoned that they must have started near this erosional limit. He inferred that the falls migrated upstream as a classic 'knickpoint' to their present location. The question was, "how fast did the falls migrate?"

Fortunately the explorers that first encountered the falls and settled the Twin Cities area made relatively careful maps. Winchell used these maps to plot the position of the falls at various times (Figure 2) and to calculate a mean retreat rate for the knickpoint. If the falls had migrated upstream at this rate from some initial location, Winchell could try to find this initial location and determine where the falls actually started. Furthermore, because he knew the retreat rate, he could calculate how long it took for the falls to reach their current location from this initial position. It was easy to find the initial location of the falls: he just followed the course of the Mississippi River downstream until he reached the limit of the Platteville Limestone, just east of downtown St. Paul (Figure 3). It was a simple task to calculate the time it took for the falls to migrate from this downstream location to its current position, because:

Winchell estimated this age at 8,000 ybp. But how did he know that this represented the end of the last ice age? The answer hinges on geological mapping.

Early geological maps of the Twin Cities area not only showed the eastern erosional limit of the Platteville Limestone, but also the evidence of ancient valleys, now filled entirely by glacial sediment. Mapping of these valleys illuminated an entire paleo-drainage network that pre-dated the modern drainage system (Figure 3). One such valley formed the eastern erosional limit of the Platteville Limestone and it passed, from north to south, immediately east of St. Paul. Winchell inferred that these ancient valleys were created by glacial outwash streams that eroded deeply into the bedrock. More importantly for his estimate, however, was his recognition that a much larger St. Anthony Falls must have formed on the edge of this ancient valley and that a much larger river excavated the glacial sediments downstream of the falls (Figure 3, reach C). He called this ancient river the Glacial River Warren.

Below the falls the River Warren followed the course of the modern Mississippi River and it rapidly downcut and excavated the earlier valley fill (figure 3, reach C). The river now occupied a valley that was lined by resistant cliffs of Prairie Du Chien Dolomite and a lower and middle terrace formed in glacial outwash deposits. At Pine Bend and Grey Could (figure 3), these resistant cliffs opened up and the north-south flowing river turned abruptly to the east, following and excavating an even wider and deeper buried valley that probably represents an older River Warren course (Figure 3, reach 'D").

Meanwhile, the large waterfall east of St. Paul began to retreat. It migrated upstream as a single waterfall until it reached the location of modern-day Fort Snelling and the confluence of the Minnesota and Mississippi Rivers (Figure 3, reach 'B'; Figure 4), where a northwest-retreating branch of the falls peeled off and retreated up the modern day Mississippi River course (figure 3, reach 'E'). This smaller branch of the river scoured out the modern gorge. Tributary streams formed smaller waterfalls as their local base level suddenly dropped. Minnehaha Falls is one such tributary fall (Figure 5). The River Warren was fed by Glacial Lake Agassiz, a massive lake that formed behind a recessional moraine (Figure 6).

As the Laurentide Ice Sheet retreated, it left recessional moraines: ridges of glacial till that bounded the glacial front. Meltwater from the retreating ice became dammed behind the recessional moraine and an enormous "proglacial" lake - Glacial Lake Agassiz - formed in the Red River Valley. At its maximum extent at about 11,000 ybp this lake extended north well into the Manitoba and Saskatchewan provinces of Canada (Figure 6). When Lake Agassiz's outlet shifted, the source of the River Warren literally dried up. Winchell deduced the presence of Glacial River Warren and that it was this last and immensely powerful river that created the "Falls of St. Anthony."