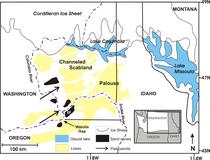 Hide
Depiction of the Channeled Scabland and Palouse region during the last glacial maximum. Old loess was scoured by floods to leave a braided network of loess islands. Floods sediments deposited in basins were reworked by the wind to form sand dunes (black) and loess (yellow). EF is the location of Eureka Flat. Mark Sweeney, University of South Dakota. 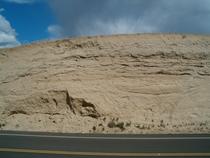 Hide
This thinnly bedded glacial outburst flood sediment exposed in Eureka Flat has a similar grain size distribution to the thin (<1 m) loess capping the outcrop. The flood sediment is the source for much of the Palouse loess. Mark Sweeney, University of South Dakota. 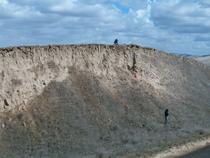 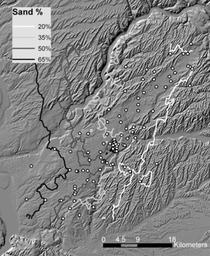 Hide
Eureka Flat, shown in this DEM, is a deflational zone aligned with prevailing southwesterly winds. Percentage of sand within surface sediments of Eureka Flat document dunes that mantle the upwind surface, and show a fining downwind trend towards the loess-mantled landscape. The southwest portion of the flat has been a depocenter for glacial outburst flood sediment, a source for dust and eolian sand. Mark Sweeney, University of South Dakota.

The Columbia Plateau in southeast Washington houses 2 striking geomorphic features: the Channeled Scabland and the Palouse loess. Despite the different geological processes involved in their development, the formation of the Palouse loess (accumulations of dust) is reliant upon the glacial outburst floods that formed the Scabland in that fine-grained sediments deposited by the floods became the source of dust for the Palouse. Central to the story is Eureka Flat, a low-lying deflational plain that serves as both a depositional center for flood deposits and a major source of eolian sediment, making it one of the most significant geomorphic features in southeastern Washington.

Huge geomorphic features found on the Columbia Plateau in a region known as the Channeled Scabland puzzled geologists for decades. Multiple large, dry channels known as coulees, huge gravel bars containing mega-ripples, dry falls, areas of scoured Columbia River Basalt, and expansive fine grained sedimentary deposits were first interpreted to have some kind of glacial or fluvial origin. J Harlen Bretz, a geologist who surveyed this region, had a visionary moment when he realized that these features, as large as they are, could not have been formed by rivers or glaciers but by huge floods. His hypothesis, strongly supported by a variety of field observations, was largely rejected by his colleagues until the main source of water for such large floods, glacial Lake Missoula, was documented. In fact, glacial Lake Missoula filled and drained multiple times in the late Pleistocene, and perhaps many times before. The catastrophic draining of glacial Lake Missoula was triggered by the destabilization of an ice dam along the Clark Fork River, sending millions of cubic meters of water per second through the panhandle of Idaho, southeast Washington, and along the Columbia River until the water drained to the Pacific Ocean.

A constriction along the Columbia River near the Washington-Oregon border caused flood waters to back-up and temporarily pond in the Walla Walla, Pasco, and Yakima valleys of southeast Washington. These temporary lakes, lasting perhaps several days or weeks, left behind thick deposits of sand, silt, and clay-rich sediment. Once the water drained, prevailing southwesterly winds of the region reworked this sediment into sand dunes and loess, blanketing a large region in southeastern Washington known as the Palouse with meter upon meter of loess.

Just downwind of the constriction at Wallula Gap sits Eureka Flat, a narrow deflationary basin aligned with the prevailing winds. Here, evidence for several episodes of glacial outburst floods are found along with modern and ancient sand dunes, and some of the thickest loess of the region.

Loess is an accumulation of dust that has been altered to some degree by pedogenic processes. The formation of loess requires a source of dust that is easily entrainable. Silt in and of itself is difficult to entrain directly by the wind because of its small size and electrostatic properties. Therefore, saltating sand grains that bounce along the surface are key to liberating dust-sized grains into the atmosphere for suspension transport. Sand dunes are often found upwind of loess deposits for this reason: sand dunes and loess can be genetically related when they are derived from the same source area, the loess being dependent upon the transport of the sand grains to form dust. Dust accumulates to form loess when 1) wind speeds fall below that which is needed to keep the dust entrained, 2) precipitation events cause dust to rain out of the atmosphere, or 3) attraction of small particles create larger particles that settle out of the atmosphere. For loess to accumulate to any thickness, there must be a trap to keep the dust from being re-entrained, including moist soil or vegetation that baffles the wind. Two main trends are observed in most loess deposits: 1) loess becomes finer-grained downwind as the coarser particles settle out closer to the source area, and 2) loess becomes thinner downwind as a majority of the particles also settle out closer to the source area. This leaves loess deposits far from the source typically thin and clay-rich.

As expected, the loess thins and becomes finer grained downwind of Eureka Flat. A narrow finger of thick loess extends approximately 100 km from Eureka Flat to the northwest, aligned with prevailing winds. Eureka Flat has been coined a "dust engine" because it contains a thick accumulation of fine grained sediments delivered by glacial outburst flooding periodically over at least the past 75 kyr. Holocene sand dunes mantle the upwind part of Eureka Flat, while loess mantles the region downwind. Older eolian sand sheet deposits buried beneath the loess at the downwind margin of Eureka Flat and attest to its deflationary nature and antiquity as an area of eolian activity. The loess downwind is characterized by multiple units separated by paleosols timing to different glacial maxima.

The glacial outburst floods had an overriding impact on the geomorphology of southeast Washington, eroding away old features to build new ones. In their wake, the floods left voluminous fine grained sediment at Eureka Flat over and over again. The wind took advantage, scouring sediments and leaving behind sand dunes and loess. Once one package of flood sediment was just about exhausted, new floods would periodically replenish the sediment supply. Loess mantled the topography downwind with an even blanket, in some places up to great thicknesses. Flood deposits continued to emit dust in the late Pleistocene when the Columbia Plateau was predominantly arid. Except for a few interruptions, vegetation expanded with increasing moisture in the Holocene that limited eolian activity. Rich soils have formed in the loess, important for farming in the Palouse region today.