Coastline changes to Aceh from the great 2004 Sumatra-Andaman earthquake 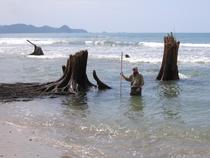 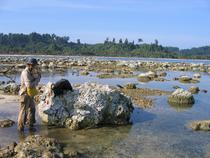 Hide
Coral reef lifted out of the water by the 2004 Sumatra-Andaman earthquake near Simelue Island. Andrew Moore, Earlham College.

The 2004 Sumatra-Andaman earthquake, one of the largest earthquakes ever recorded, did more than shake northern Indonesia. In addition to generating a devastating tsunami, it permanently dropped the Acehenese coastline by up to 1 m (Figure 1), and uplifted nearby islands by up to 2 m (Figure 2, 3). This sudden change in relative sea level caused new coastline along most of the southwest coast of Aceh, resulting in rapid adjustment by the shore to these new conditions, and creating new hazards for an already devastated populace.

Where the shoreline dropped, river valleys and farm fields were drowned, and a new shoreline developed quickly by wave action (Figure 4, 5). The loss of farms makes local people more reliant on food aid from outside, but the new shoreline increases the problem by changing local drainage patterns as river mouths are blocked by the new beach. The drowned river valleys can permanently enlarge coastal drainages, requiring new bridges before contact can be reestablished with the rest of Indonesia.

Where the shoreline uplifted, coral reefs which commonly protect the shoreline from large waves were destroyed, leaving uplifted coastal regions vulnerable to coastal retreat. Reefs and mangroves also provide a haven for fish used as food by locals, so that the loss of these habitats also results in a decline in available food. Sediment flux from these shorelines tends to increase, and harbors previously accessible to fishing boats may be uplifted to the point that they are no longer usable.

Damage from the 2004 Sumatra-Andaman earthquake resulted from more than earthquake shaking and the tsunami that accompanied the earthquake. Tectonic uplift and subsidence caused coastal changes that can be considered permanent on human timescales. Understanding the nature and distribution of these changes is the work of geomorphologists, and such an understanding will be necessary to any sustained rebuilding effort in this region.