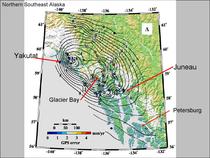 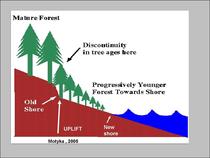 The rebound or uplift of land after glacier ice melting has been documented in many regions following the end of the Last Glacial Maximum (LGM). During this time, about 20,000 years ago, huge ice sheets up to 3 km thick, covered northern North America, northern Ireland, Scotland, Europe, parts of Asia as well as Greenland and Antarctica. In southeastern Alaska between Yakutat and Dixon Entrance, Cordilleran ice flowed out of high coastal mountain accumulation areas between 28,000 to 18,000 years ago and spilled out of confining valleys to formed ice lobes that expanded across an emergent continental shelf (Figure 1). Globally sea level was ~125 m lower but locally the glaciers loaded the crust resulting in sea level rise. As the climate warmed this ice began to disintegrate, flowing back into the world oceans, transferring its mass from the continents. The visco-elastic response of the formerly loaded crust was to rise up. As this uplift was going on, early Alaskans are now believed to have migrated along the coast from Asia, and utilized refugia on the emergent continental shelf between expanded glacier termini. Marine resources provided them with food. As sea level rose in the Early Holocene, these Alaska Natives probably experienced up to 2-3 meters of sea level rise in their life times. The flood was on. Crustal uplift following deglaciation 12,000 to 10,000 year ago, lifted fjord-bottom silts with their iceberg dropstones and marine subfossils, up to 215 m above modern sea level in the Juneau area. Deltas formed where glacier outwash entered the marine environment were also uplifted and are now exposed as beautiful foreset beds about 30 m above modern sea level. These are locally quarried for their well-sorted sands and gravels(Figure 2).Glacial marine and fluvial sediments contain old wood and shells. Stratigraphic and radiocarbon chronologies reveal their archive of early Holocene history. Modern elevations of these sediments provide information about extents and rates of post-LGM uplift. Sea level curves constructed from marine sediments show areas of variable ice loading and unloading up and down the southeast Alaskan coast. Marine incursion maps can be reconstructed using topography, bathymetry and the modern elevations of these uplifted marine sediments. In the Juneau area, total uplift exceeded 300 m as a result of local loading by ice. During the mid Holocene warming 9,000-5,000 years ago, ice withdrew from sea level valleys and fjords. The Neoglacial marked the onset of cooling climate beginning about 5,000 years ago and glaciers began to readvance, filling Glacier Bay, and other coastal valleys. This icy pulse lasted through the mid-eighteenth century culminating in the Little Ice Age (LIA). Over the past 250 years, in Glacier Bay, the loss of ~100 linear km of rapidly retreating ice has resulted in renewed uplift. The post-LGM pulse of uplift has largely subsided, but new post-LIA uplift rates as high as 25 cm/yr have been measured using differential GPS and campaign style reoccupations of local area US Coast and Geodetic Survey monuments, that were originally emplaced in the early twentieth century. From Yakutat to Petersburg, a new landscape is forming that includes emergent tidal flats and salt marshes as well as incised lower stream valleys (Figure 3). Tree ring studies document the expansion of Sitka spruce forests seaward, as the tress take advantage of this newly exposed habitat. This data can be used to independently date the extent and rates of these coastal emergence patterns (Figure 4). Currents rates of uplift will probably continue for several more centuries, keeping this part of Alaska temporarily safe from world-wide sea level incursion. The town of Gustavus (Figure 5) now has a golf course, built on these new accretionary lands. Cruise ships in Glacier Bay, sometimes run aground when their navigators don't pay close enough attention to this dynamic bathymetry. While northen Southeast Alaska is experiencing uplift, ongoing melt from Alaska's coastal glaciers has been contributing up to 7% to the total global sea level rise.