Clearcutting and Erosion in New England - the Photographic and Stratigraphic Record 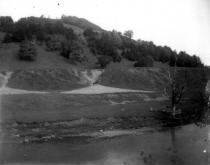 Hide
The image shows a heavily eroded river bank with three clearly defined terraces. A lone horse is standing in the middle of a sandy alluvial fan and sheep are scattered around farther down on a terrace. A gully is just above the fan. Vermont Historical Society.

Hide
Here, is the inside of an alluvial fan laid open for all to see. The meter stick provides a scale and it's easy to find the chocolate brown soil A horizon buried by over a meter of sandy silt that came down from the steep slope above during post colonial times. Paul Bierman. 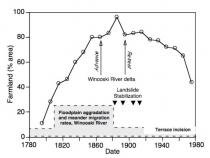 Hide
One can pull together disparate strands of information into a graphic that portrays landscape change over time. Here, the clearance and reforestation of northwestern Vermont over the 1800s and 1900s is clearly shown. One can see how the local river responded to increasing sediment loads from the slopes by aggrading and extending its delta into lake. The age of regrowing trees tells you when the landslides in one basins stabilized cutting off the sediment supply. Paul Bierman.

Today, New England is a place of forests. People from around the world travel to see the Green Mountains of Vermont, the White Mountains of New Hampshire, and the all foliage of Maine. Yet, New England didn't always look like this. At the peak of the last glaciation it was all under ice. Then, when the ice left, tundra reigned until the climate warmed and the trees grew back. Native Americans manipulated the vegetation with fire but it was the arrival of European colonists that really changed the scene - ripping trees from steep, soil-mantled slopes, clearance that left the landscape vulnerable to erosion when rain poured from the sky.

Imagine a time machine that could take you back 150 years. Open the door and look out at the slopes of Vermont, the Green Mountain State. In 1850, the slopes would be anything but green. Most would be barren, stripped of their trees, and trampled by grazing sheep. Deep gullies and shallow landslides were common. Some of this eroded material ended up in river channels choked with sediment but much of it went no farther the bottom of the hill from which it was eroded. Vermont of the mid 1800s was much more the Brown than the Green Mountain State.

A variety of tools and approaches help us understand the behavior of now-vanished landscapes. Everyday objects, such as photographs, bear witness to the flood of material pouring off slopes from gullies and landslides. Look closely and you can see sand eroding from a gully and accumulating in an alluvial fan at the base of steep river terrace riser. Or, do what geologists do and dig into one of these fans with a back-hoe or a shovel and you'll find rich forest soils buried by layers of sediment. Radiocarbon dating clearly shows that most of the sediment burying forest soils can down about the time North America was settled by Europeans. One could imagine this a coincidence until over and over you find there are the low furrows and horseshoes in the rich soil and buried by the debris shed from the wasting slope above.

So, what's the process link between clear-cutting and erosion. It's all in the roots. Tree roots hold soil together providing what is termed effective cohesion. This cohesion holds the soil to the slope allowing it to defy the shearing force of gravity. Many times, even in the absence of trees and their slope-fortifying roots, the slope will be stable until it rains and rains hard. The rain raises the water table. The pore pressure between the soil grains rises and some of the mass of the grains is borne by the groundwater weakening the slope just enough that down comes tons of soil in a massive landslide. Some soil enters river channels, overwhelming their ability to move it downstream and the channel aggrades as more mass comes in than goes out.

When New Englanders moved west and abandoned upland farms, everything changed. Left un-tilled and un-grazed, pastures and fields returned, in just a few decades, to forested woodlands. Hillslopes stabilized and sediment loads to streams declined. The rivers, once choked with sediment from eroding gullies and landslides, now ran clear and knifed through the sediment accumulated on their beds when clear-cut slopes bled sediment. Today, New England rivers are still re-adjusting to the colonial and post-colonial insult delivered from barren hillslopes. Having largely cut down through the pile of accumulated debris, they are eating away at their steep confining banks of century-old legacy sediment - the detritus of an unplanned experiment in land-use impacts performed by tens of thousands of early New England farmers.