A Short Selection of Advertisements

Advertisers constantly thrust quantitative information in our face. Product claims, store enticements, health benefits, and scores of other contexts use short quantitative arguments to catch a reader's eye (and possibly money). This example shows how one can use these ads to bring added content to a quantitative reasoning course. 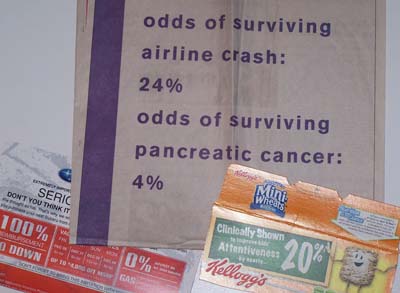 Survival Rates
: Could be used at any time in any quantitative reasoning course. It is especially useful in introducing the notion of "odds" or probability. Note that the ad uses the term "odds" although the quantitative information is expressed in terms of a probability.

Automobile Trade-in: Could be used at any time in any quantitative reasoning course. This is a nice example to instill the helpfulness of mental arithmetic or approximation. Can one roughly approximate the range of deductions that is allowable under the advertised claim?

Environmental Claim: Again, this could be used at any time in any quantitative reasoning course. It is especially useful to indicate the confusing language that often surrounds the comparison of two quantities. Students should be taught to be extra careful when reading phrases such as "... percent more than..." or "... percent less than..." as they are often misused or used in confusing or ambiguous ways.

In a large one-page advertisement in the New York Times on October 1, 2008 the following appeared in the space above the fold:

In a mailing from a car dealership it was advertised that the dealership was offering 100% reimbursement for an owner's current vehicle when purchasing a new car. Phrases such as "100% reimbursement...0% Down", "Any customer trading in a 1997-2006 model on a 2008 or 2009 model will receive 100% of the factory full base model MSRP when new (as provided by Black Book)!" "All customers will receive 100% of the base model MSRP in trade toward a new car."

Eventually the fine print yields "The only deductions will be made for mileage ($0.15 - $0.75 per mile depending on make, model, and reconditioning)."

Inside an airport parking shuttle bus was the following claim:

"This bus reduces carbon footprint by 54% and gas consumption by 300%."

a. What units are used to measure a carbon footprint?

b. Using one of the calculators, estimate your carbon footprint.

c. According to the calculator, what would it take to reduce your carbon footprint by 54%?

Survival Rates: This was an advertisement by Cablevision to announce its support of The Lustgarten Foundation's work in pancreatic cancer research. There are several issues that can be brought up in a discussion of this ad:


Automobile Trade-in: This is a great example to practice basic assumption making as well as quick mental estimations. Quantitative reasoning should be thought of as a habit of mind. If a student is shown this advertisement does he or she take a moment to figure out how much "wiggle room" the automobile dealer has in the "100% reimbursement" promise? Suppose one has a low-mileage older model to trade in. Let's assume one only averages 7,000 miles a year for nine years. This is 63,000 miles. If the dealer sticks to one of the lower values for deduction, say $0.20, this would amount to a $12,600 deduction. A mid-range value of $0.50 is also easy to calculate in one's head: about $31,500. Since the new MSRP of the types of cars sold at this dealership is around $20,000 - $25,000, the dealer is essentially promising nothing.

Environmental Claim: Phrases which attempt to describe percentage increases or decreases are often misleading or ambiguous, especially when one of the figures is greater than 100%. For this example, it is important to investigate if there is a consistent reasonable interpretation of the phrase "... reduces x by y percent...".

While it is the second claim in this advertisement that might initially catch one's eye, the first claim also opens up some possibilities for student exploration. How is a carbon footprint measured? What are the units? What does it take to reduce a footprint by 54%? The online calculators can be used as a starting point to investigate these questions.

Survival Rates: While a more formal assessment is possible for this example, it may be best used to form the basis for a class discussion on the differences between odds and probability and perhaps the notion of conditional probability. The figures used in this example may be used later for individual in-class assessment. For example, a test item may ask students to use correct language to state the odds of surviving an airplane crash if the probability of survival is assumed to be 24%.

Automobile Trade-in Value: Students turn in a written analysis of their findings. The written report should 1) be well organized, 2) clearly state all assumptions (e.g. MSRP of a trade-in or a new automobile), 3) examine the effect of older or newer trade-ins, 4) examine the range of possible deductions for any given trade-in model, and 5) offer some personal impression on the overall effect of the advertisement.

Environmental Claim: Having students provide individual written responses to items 1-3 before any class discussion allows the instructor to assess students' prior knowledge and preconceptions regarding how one measures and describes change. The instructor can then address any common misconceptions in a subsequent class. Item 4 can be used as the basis for a more extended project if desired.