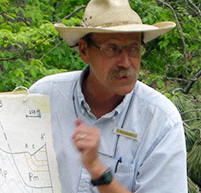 Provenance: Bruce Douglas (Indiana University)
Reuse: This item is offered under a Creative Commons Attribution-NonCommercial-ShareAlike license http://creativecommons.org/licenses/by-nc-sa/3.0/ You may reuse this item for non-commercial purposes as long as you provide attribution and offer any derivative works under a similar license.

The GEOL G111 course is designed to provide the students the skills necessary to transition from high school–level science courses to the university level as well as supply specific content information intended as a basis for the more topically focused courses at the sophomore and junior level.

Hide
Basic concepts of geology. Formation of rocks, erosion and landscape evolution, plate tectonics, interpretation of earth processes from geological data. Two lectures and one laboratory per week. One required field trip. Restricted to prospective geology and other science majors.

Hide
The topics include plate tectonics; minerals; igneous, sedimentary, and metamorphic rocks; volcanoes; earthquakes, faulting folding, and mountain building; surface and groundwater hydrology; oceans; glaciers; deserts; and economic resources. Lectures provide highlights and details above the level covered in the text selected for the course. All labs are set up as projects that have individual objectives; the lab format contains aspects that require the student to work within a problem-solving format and all labs require a final analysis and the submission of a final set of materials and/or a report.

Note: This module was designed to be used in an upper level course in hydrology, hydrogeology, environmental geology or similar courses. Due to a scheduling change in our department's course offerings, it was used in an introductory course geared for majors to avoid delays in the module development.

This module was used in an introductory physical geology course with great success, despite the fact that it was designed for upper-level topical courses. The success was in part a testimony to the ability of the students in the class and their excitement to learn about, and analyze, the various applications of geodetic data sets that they did not know existed. This was amplified when they understood that this data could be used for making critical societal decisions concerning water use and allocation. The students, while initially a bit timid with the use of some of the higher-level functions of Excel, became adept at plotting and interpreting the large time series that comprise much of the data included in the module. Because some of the students were relatively skilled with Excel, a good amount of sharing and peer learning took place. While some tasks included within certain parts of the module were beyond the abilities of these particular students, the use of prepared plots allowed them to make interpretations of the data. The students also were able to see the importance of integrating geologic information and the spatial patterns determined from a geologic map with various types of traditional hydrologic data and the geodetic data to arrive at moderately sophisticated conclusions. The short-answer format of many of the unit questions coupled with an outline for what should be included in a scientific report worked well. It had the extra benefit of exposing these students, who were primarily freshman and sophomores, to scientific report writing, a skill that they will need in their upper-level courses.

The fact that the GPS systems/technology they use on a daily basis on their cell phones could also measure ground water changes in real time was a significant revelation.

In general I used the module as is. I did some combining of Units 3 and 4. Additional time needed to be allotted for getting the students up to speed with Excel, and in some cases, rather than making their own plots, the students needed to have the plots made for them. Some of the multistep calculations were simplified and others eliminated as a time-saving measure.

GEOL G111 is a 15-week semester course with topics organized in a traditional manner that roughly follows the chapter sequences in the selected textbook. The module was used at the same time that surface, ground water, and the hydrologic cycle were scheduled to be covered in conjunction with the text and syllabus. Implementation of the module took place over a period of 2.5 weeks. Lecture time was used to provide background presentations and discussions, instruction on what aspects of each unit were critical to understand well, and reminders of the quantitative skills that they would need to apply. Demonstrations of Excel data manipulation and plotting were carried over into the laboratory sessions, along with time for analysis and interpretation of the data. Those portions of the module that involve team work complemented the more traditional individual styles used in the regular lab exercises assigned in this course.

Assessments were made through a combination of techniques that included evaluation of the short answer or quantitative answers, the completeness and usefulness of the graphs and plots, the level of integration of multiple data sets in a response, and the final report. For the latter, a modified version of the supplied rubric was used to account for the student's experience with report writing. The short answer format was similar to that which they had been following in the regular labs for this course, so they were comfortable with that. They were less comfortable with the report format both in terms of the preparation of the report and how it was evaluated, keeping in mind these were primarily freshman and sophomores.

The unit was envisioned as an introduction to data-rich analysis and interpretation with important societal implications. The hydrologic cycle is an ideal context in which to undertake these efforts. It has rich traditional data sets that can be used to calibrate and contrast with the new geodetic data sets. As such there are two themes that run through this module. One involves the scientific aspects that will lead to greater scientific competencies, and the other is developing an awareness that there are important societal implications that stem from this information.

Stated in terms of goals, this module is designed to push the students to analyze and integrate their observations from diverse data sets that include both temporal and special components. In doing so they will need to compare and contrast these different data sets and in order to do so they will need to perform a number of unit conversions, calculations, and determinations of the uncertainty in their conclusions. Finally, they will compare the impact of human interaction/intervention into the hydrologic cycle and be able to evaluate the magnitude of human impact versus natural pattern with regard to the cause of a drought.

Based upon the students' work for this module, it is clear that significant progress was made with respect to the stated vision and goals. The students demonstrated: