An image of the gray wolf. 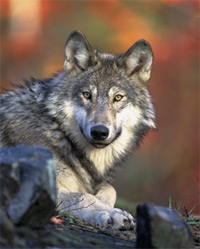 In places such as Idaho the gray wolf plays a vital role in the health and proper functioning of ecosystems. The gray wolf is listed as a threatened species on the U.S. Endangered Species List. Wolves in the Greater Yellowstone area and central Idaho are listed as threatened, nonessential. Idaho has an estimated population of 283 gray wolves.
Originally uploaded in Integrating Research and Education:Impacts on American Indian Lands:Nez Perce.

Last Modified: 2007-06-08 10:59:09
Permanent URL: https://serc.carleton.edu/download/images/6338/gray_wolf.jpg
The file is referred to in 1 page
Provenance
Image courtesy of Idaho Fish and Game.
Reuse
No information about limits on reusing this item have been recorded. You will need to contact the original creator for permission in cases that exceed fair use (see http://fairuse.stanford.edu/).