At a "21st Century Jobs Summit" 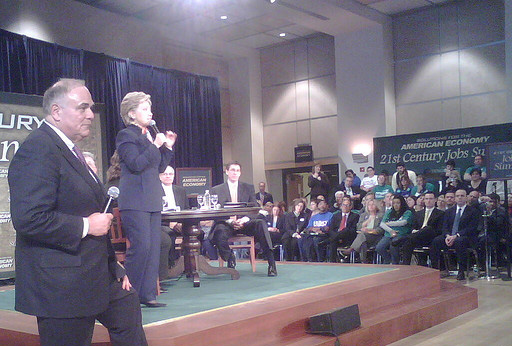 At a "21st Century Jobs Summit" in Pittsburgh, hosted by Hillary Clinton during her 2008 campaign for the Presidency. Pennsylvania Governor Ed Rendell is standing off the stage. "Green jobs" was one focus of the summit.
Originally uploaded in Integrate:Workshops and Webinars:Programs that Bring Together Geoscience and Sustainability.

Last Modified: 2012-09-27 16:07:19
Permanent URL: https://serc.carleton.edu/download/images/35635/quot21st_century_jobs_summitqu.jpg
The file is referred to in 1 page
Provenance
From Wikimedia Commons: http://commons.wikimedia.org/wiki/File:Hillary_Clinton_Jobs_Panel_2008_PA.jpg
Reuse
This item is offered under a Creative Commons Attribution-NonCommercial-ShareAlike license http://creativecommons.org/licenses/by-nc-sa/3.0/ You may reuse this item for non-commercial purposes as long as you provide attribution and offer any derivative works under a similar license.