Things to do in Columbus, Ohio. 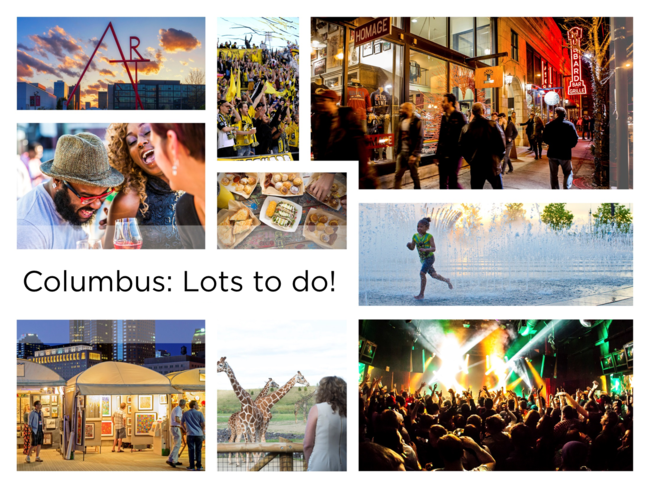 Find live music any night of the week, local drinks at watering holes all across the city, and an accessible, diverse art scene that leaves many bigger cities envious. During the summer months, the Columbus Symphony brings outdoor concerts to downtown's Columbus Commons for its popular Picnic with the Pops series. The Brewery District's Shadowbox Live! is America's largest resident theater company, and performances range from the comedic to the artsy. You can find local musicians playing live any night of the week at clubs across the city like Notes, Little Rock, Skully’s Music-Diner, Ace of Cups and the Big Room Bar. National acts take the stage at venues like Newport Music Hall, the Scottenstein Center, Express Live! and Nationwide Arena. Columbus boasts more than 30 microbreweries, and a nice assortment of them can be found near the downtown corridor. Wolf's Ridge, Seventh Son, Hoof Hearted, North High, the Elevator, Barley's and Land-Grant all have great tap rooms full of unique brews. The Columbus Ale Trail is another way to explore the bounty of beer in Columbus. Watershed Distillery is known for its citrusy gin, and Middle West Spirits wins fans with its flavorful wheat vodka and whiskeys.
Originally uploaded in Network of STEM Education Centers:Conferences:2018 NSEC National Conference.

Last Modified: 2017-12-13 11:20:27
Permanent URL: https://serc.carleton.edu/download/images/171033/things_do_columbus_ohio..png
The file is referred to in 1 page
Provenance
The photo is licensed for public use from http://brandcolumbus.com.
Reuse
This item is offered under a Creative Commons Attribution-NonCommercial-ShareAlike license http://creativecommons.org/licenses/by-nc-sa/3.0/ You may reuse this item for non-commercial purposes as long as you provide attribution and offer any derivative works under a similar license.