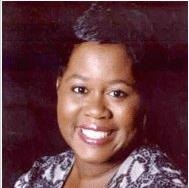 Provenance: Camellia Okpodu, Xavier University of Louisiana
Reuse: This item is offered under a Creative Commons Attribution-NonCommercial-ShareAlike license http://creativecommons.org/licenses/by-nc-sa/3.0/ You may reuse this item for non-commercial purposes as long as you provide attribution and offer any derivative works under a similar license.

Dr. Camellia Moses Okpodu, Professor and former Chair of Biology at Norfolk State University (NSU), is the director of both the NSU Defense Intelligence Agency's designated Intelligence Community Center for Academic Excellence (DIA designated IC-CAE) and the Group for Microgravity and Environmental Biology (GMEB). She has a Ph.D. in Plant Physiology and a minor in Biochemistry from North Carolina State University (Raleigh, NC). Before joining NSU, Dr. Okpodu was the Marshall Rauch Distinguished Professor of Biology at Elizabeth City State University (Elizabeth City, North Carolina). She has more than 15 years of experience as an administrator and over 20 years of experience as both a program director and a research scientist. She has served as a project director on a number of research initiatives involving both high school and undergraduate students. Her career has included the directorship of many different types of STEM education projects funded by NASA, NIH, NRO and NSF. Dr. Okpodu has served as an educational consultant to governmental agencies, private foundations, public school divisions, and institutions of higher learning. Dr. Okpodu is a "STEMotivator and Edu-tainer." She enjoys sharing with others her passion, purpose, persist model for resilience.

Dr. Okpodu is a member Sigma Xi, Beta Kappa Chi National Scientific Honor Society, and the American Society of Plant Biology. Her academic and professional awards include the Gordon Research Conference Travel Award, the Intelligence Community Faculty Scholar Award, and both the Award of Recognition and the Special Recognition of Merit Award from the Office of the Director of National Intelligence. In 2014, her biography was included in the National Library of Congress as a Science History Maker.

Although she enjoys the professional accolades her proudest accomplishment is that as a single mother, she raised now three college educated women - two who have followed her into STEM (Dr. Samelia Okpodu Pyuzza and Ms. Elizabeth Okpodu) and one who shares her love of the Arts (Ms. Koren-Grace Okpodu). Dr. Okpodu feels that her daughters are a prime example of her strategy in offering an integrated approach to learning.

Integrating African-American History into Biology: Mitosis, Epigenetics and 1619 "Foodways" part of Integrate:Workshops and Webinars:Pan-African Approaches to Teaching Geoscience:Essays
Camellia Moses Okpodu, , Norfolk State University In recent years, it has become apparent that the environment and underlying mechanisms affect gene expression and the genome outside of the central dogma of ...