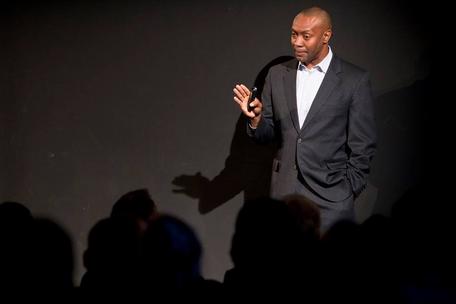 Dr. J. Marshall Shepherd is a leading international expert in the area of weather, climate, and atmospheric related sciences. He is a Professor in the Department of Geography at the University of Georgia (UGA) and Director of the UGA Atmospheric Sciences Program. He was also recently named a UGA Athletic Association Professor, a significant milestone on the campus.   Dr. Shepherd is the President of American Meteorological Society (AMS), the nation’s largest and oldest professional/science society in the atmospheric and related sciences. He is also the U.S. Representative to the International Federation of Meteorological Societies (IFMS).

Dr. J. Marshall Shepherd joined the Department of Geography at the University of Georgia (UGA) in January 2006. Prior to joining the UGA faculty, Dr. Shepherd spent 12 years as a research meteorologist in the Earth-Sun Division at NASA-Goddard Space Flight Center. Dr. Shepherd was also Deputy Project Scientist for the Global Precipitation Measurement (GPM) mission, which launches in 2013.  He is a Full Professor and Director of the UGA Atmospheric Sciences Program. He conducts research and teaching in atmospheric sciences, climatology, water cycle processes and urban climate systems. Dr. Shepherd is currently a member of the NASA Precipitation Science team. For his pioneering work using satellite data to investigate urban hydroclimate processes, Dr. Shepherd received the highest federal award given to the Nation’s young scientists and engineers. President Bush honored him on May 4th 2004 at the White House with the Presidential Early Career Award for pioneering scientific research.  Dr. Shepherd is a Fellow of the American Meteorological Society. This honor is only given to two-tenths of one percent of the membership for outstanding scientific contributions in the atmospheric and related sciences.  Dr. Shepherd was also recognized by the AMS with its Charles Anderson Award for his career contributions in the areas of diversity.

Dr. Shepherd has nearly 80 publications in high-impact journals, books, and international/federal reports.  His research findings have been presented at well over 60 national and international conferences, and he has been invited to deliver over 100 presentations at colloquia, briefings, or public venues. NASA, U.S. Forest Service, National Science Foundation, Department of Energy, and the Defense Threat Reduction Agency have funded Dr. Shepherd’s research.

Dr. Shepherd currently serves on the National Oceanic and Atmospheric Administration (NOAA) Science Advisory Board, the Earth Science Subcommittee of the NASA Advisory Council, and the NASA Goddard Space Flight Center Visiting Expert Committee. He has also served on National Science Foundation Advisory/Visiting Committees and the Department of Energy ARM Science Board.  He was a member of the United Nations World Meteorological Organization steering committee on aerosols and precipitation, 2007 Inter-governmental Panel on Climate Change (IPCC) AR4 contributing author team, the NOAA Climate Working Group, a National Academy of Sciences (NAS) panel considering the security implications of climate change on U.S. Naval operations, and a NAS Committee on Urban Meteorology. Dr. Shepherd is a Project Associate for the Urbanization and Global Environmental Change Project and past editor for both the Journal of Applied Meteorology and Climatology and Geography Compass, respectively. At UGA, he has served on the Franklin College Faculty Senate, Franklin College Task Force on Diversity, and his Department’s Advisory and Graduate Studies Committees. He currently serves on the UGA Provost Executive Search Committee. Dr. Shepherd was also instrumental in leading the effort for UGA being voted 78th member of the University Corporation for Atmospheric Research (UCAR).

Dr. Shepherd is frequently sought as an expert on weather, climate, and remote sensing. He has appeared on The Today Show, Larry King Live, CNN, Fox News, The Weather Channel and several others.  Dr. Shepherd is also frequently asked to present findings and results to key leaders at NASA, Congress, Department of Defense, and to officials from foreign countries. In February 2013, Dr. Shepherd briefed the U.S. Senate on climate change and extreme weather. He has also written several editorials for the Washington Post, Atlanta Journal Constitution, and numerous other outlets and has been featured in Time Magazine, Popular Mechanics, and NPR Science Friday. He is also a contributing author to Ebony Magazine.

Dr. Shepherd received his B.S., M.S. and PhD in physical meteorology from Florida State University.  He was the first African American to receive a PhD from the Florida State University Department of Meteorology, one of the nation’s oldest and respected.  He is an AMS/TRW Industry and Dolores Auzene Fellow as well as a National Achievement Scholar. He is a member of Sigma Xi Research Honorary, Chi Epsilon Pi Meteorology Honorary, and Omicron Delta Kappa National Honorary.  He is also a member of the Alpha Phi Alpha Fraternity, Inc.  Dr. Shepherd is the author of forthcoming textbook, The Urban Climate System, and co-authored a children’s book on weather and weather instruments.  In his spare time, Dr. Shepherd is an avid sports fan and also enjoys fitness training. Dr. Shepherd is also an audio-video-home theater enthusiast, scrabble expert, and CD collector.  Dr. Shepherd is originally from Canton, Georgia. He is married and has two kids.

Unit 5. Net Zero Water Buildings part of Water Sustainability in Cities
Unit 5 addresses the concept of Net Zero Water of buildings. Net Zero Water can be defined in different ways. For this module it means a building's water needs are supplied 100% from harvested rainwater or ...

Unit 7. Low Impact Development and Green Infrastructure part of Water Sustainability in Cities
Unit 7 continues the use of the CME Building Case Study to explore water sustainability in the context of a building. The activity is extended to the catchment level, and a new tool for catchment level storm water ...