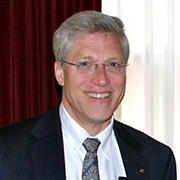 David Bressoud is DeWitt Wallace Professor of Mathematics at Macalester College, a former President of the Mathematical Association of America, and a Fellow of the American Mathematical Society. He served in the Peace Corps, teaching math and science at the Clare Hall School in Antigua, West Indies before studying with Emil Grosswald at Temple University and then teaching at Penn State for 17 years. He chaired the Department of Mathematics and Computer Science at Macalester from 1995 until 2001. He has held visiting positions at the Institute for Advanced Study, the University of Wisconsin-Madison, the University of Minnesota, Université Louis Pasteur (Strasbourg, France), and the State College Area High School.

David has received the MAA Distinguished Teaching Award (Allegheny Mountain Section), the MAA Beckenbach Book Award for Proofs and Confirmations, and has been a Pólya Lecturer and a Leitzel Lecturer for the MAA. He is a recipient of Macalester's Jefferson Award. He has published over sixty research articles in number theory, combinatorics, special functions, and mathematics education. His other books include Factorization and Primality Testing, Second Year Calculus from Celestial Mechanics to Special Relativity, A Radical Approach to Real Analysis (now in 2nd edition), A Radical Approach to Lebesgue's Theory of Integration, A Course in Computational Number Theory (with Wagon), and Calculus: Graphical, Numerical, Algebraic (with Finney, Demana, Waits, & Kennedy). He is PI on the NSF-sponsored national studies of Calculus: Progress through Calculus (NSF #1430540).

Building on the BOSE Report of Indicators for STEM Education part of Accelerating Systemic Change Network:Posts
As everyone probably knows by now, the National Academies have released their Indicators for Monitoring Undergraduate STEM Education. There clearly is much overlap with the charge to the Working Group on ...

How can we help change leaders understand how measurement and data can be used? part of Accelerating Systemic Change Network:Posts
ASCN Working Group 4: Demonstrating Impact is trying something new. This group's mission is to identify, explain, and disseminate information on metrics that hold the potential to document, foster, accelerate, ...