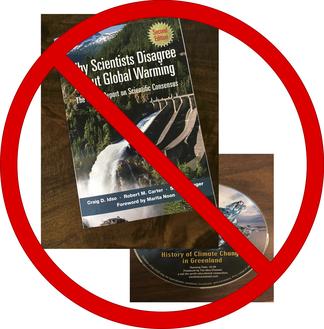 ×
Over the last few months, tens of thousands of teachers around the country have received an unsolicited package from the Heartland Institute that includes a booklet, Why Scientists Disagree About Global Warming: the NIPCC Report on Scientific Consensus, and a DVD, History of Climate Change in Greenland. The package looks official with the NIPCC's seal in the upper left corner. The deceptive marketing is intended to take advantage of many teachers' unfamiliarity with climate science.

The letter accompanying the contents encourages teachers to question the degree to which the science of climate change is settled. Questioning is is good. Questioning drives science forward and we should encourage it. However, the evidence we use to support the answers to our questions should come from high quality, peer-reviewed, scientific research.

The National Earth Science Teachers Association's position is that:

Throughout the booklet and DVD, the authors attempt to compare their organization, NIPCC, with the IPCC. Even the acronym, NIPCC is intentionally meant to be deceptive. The two organizations are vastly different. The Intergovernmental Panel on Climate Change (IPCC) is an international body of scientists established by the United Nations Environment Programme (UNEP) and the World Meteorological Organization (WMO) in 1988 to provide the world with a clear scientific view on the current state of knowledge in climate change and its potential environmental and socio-economic impacts. The Nongovernmental International Panel on Climate Change (NIPCC) is a much smaller group of scientists and scholars whose members do not believe climate change is caused by human greenhouse gas emissions. The NIPCC is funded by the Heartland Institute.

The NIPCC's booklet and DVD argue against human-induced climate change with misinformation that misrepresents scientific findings and data analyses. The booklet, Why Scientists Disagree About Global Warming: the NIPCC Report on Scientific Consensus is filled with citations, placing blogs on an equal footing with peer-reviewed science articles. The authors frequently cite their own works, of which many have not been peer-reviewed.

The DVD, History of Climate Change in Greenland, gives a historical account of Viking settlements in Greenland explaining the warming and cooling of Greenland's climate to be the result of natural solar variation. While variations in the amount of solar radiation received on Earth have caused past climate changes, these variations do not account for the current changes in Earth's temperature. One misleading example is an animation designed to manipulate the CO2 and temperature records of the Vostok ice core, making it appear that temperature always increased first, followed by an increase in CO2 which is not what the actual data show.

According to their own website, the Heartland Institute is a public policy conservative think tank based in Illinois that works to reduce taxes and government spending, expand school choice by providing public school funds to faith-based schools, eliminate the Common Core and the NGSS, eliminate medicare and medicaid, fight regulations on tobacco and alcohol, and promote hydraulic fracturing on public lands and in communities that don't want it.

Science is not a set of beliefs. Science is a way of thinking and understanding the world around us based on evidence. The amount of evidence supporting human-induced climate change is vast. Despite the Heartland Institute's claim to the contrary, scientists agree on climate change. NESTA encourages all teachers to conduct their own research by reading articles and examining the data from NOAA, NASA, and other reputable science organizations that are creating resources for teachers to use in the classroom.

Here are some links to high-quality, vetted collections:

×
The Climate Literacy Energy and Awareness Network (CLEAN) collection contains 748 educational resources that have been through an extensive pedagogical and scientific review. It also contains the best climate change science activities from NESTA's Windows to the Universe project. Search the CLEAN collection for Windows to the Universe to explore these 20 stellar resources.

×
NOAA Climate.gov is a source of timely and authoritative scientific data and information about climate with the goal to promote public understanding of climate science and climate-related events. NOAA Climate.gov makes data products and services easy to access and use, providing support to both the private and public sectors, and helping people to make decisions with the best information possible.

×
The mission of NASA's Global Climate Change: Vital Signs of the Planet is to provide the public with accurate and timely news and information about Earth's changing climate, along with current data and visualizations, presented from NASA's unique perspective. 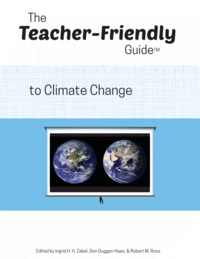 ×
The Teacher Friendly Guide to Climate Change from the Paleontological Research Institute focuses on scientific aspects of climate change: how climate works and why scientists think it's changing, and the science and engineering behind the steps that would mitigate climate change and enable humans to adapt to climate changes that do occur.


Here are some responses and position statements from other organizations:

×
NSTA responded with this letter. If you received the unsolicited materials from the Heartland Institute, they encourage you to send them in for recycling. In return, you can receive access to NSTA's e-book, Ocean's Effect on Weather and Climate.

×
The Geological Society of America's Position Statement on Climate Change