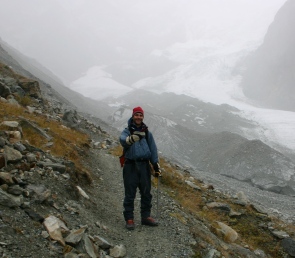 Looking for microbes in all the right places

I am a graduate student in the Department of Earth Sciences at Montana State University. In the fall of 2004 I began working with the "Digital Educational Resources in Microbial Ecology, Evolution, and Diversity" (DERMEED) program, cataloging digital resources associated with microbial life in "extreme" environments. My contribution to the DERMEED program is just one aspect of my graduate work at MSU. In 2006 I completed my M.S. in Earth Sciences under the supervision of Dr. Mark Skidmore. The title of my thesis was "Geochemical Evidence for Microbially Mediated Subglacial Mineral Weathering". Currently, I am working on my Ph.D. at Montana State under the direction of Drs. Mark Skidmore and Brent Christner (Louisiana State University). The focus of my doctoral research is on the geomicrobiology of the basal ice zone of an Antarctic glacier. This includes 1)analysis of the microbial community in basal ice, 2)analysis of aqueous, gas, and isotopic chemical signatures resulting from microbial activity in solid ice.

In October 2007 I will begin field work at the Taylor Glacier in the McMurdo Dry Valleys, Antarctica. I will document my travels and work in Antarctica at http://taylorglacier.blogspot.com.