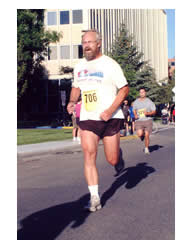 Dave gets through the day the same way he runs a marathon... one step at a time!


David Mogk is a professor of geology at Montana State University. He has recently worked on the development of the Digital Library for Earth System Education (DLESE) and the National Science Digital Library (NSDL). Dave has served as Program Director in the Division of Undergraduate Education at NSF (1995-96), is past Chair of the Education Committee and Education Division of the Geological Society of America, and is a past speaker in the National Association of Geoscience Teacher Distinguished Speaker program. At MSU, Dave has been the recipient of the Burlington Northern Award for Excellence in Teaching (1989) and the College of Letters and Sciences Distinguished Teaching Award (1995). He is also the recipient of the American Geophysical Union Excellence in Geophysical Education Award (2000). He is currently co-PI on numerous NSF-sponsored projects: CCLI National Dissemination project, On the Cutting Edge professional development workshop series for geoscience education; DLESE Community Services Center; and Microbial Life Educational Rsources (supported by the NSDL program). He is currently a member of the EarthScope Science and Education Advisory Board, and will be convening a workshop on EarthScope in the Northern Rockies in September, 2005. His research interests range from the evolution of ancient (>2.5 billion year old) continental crust in SW Montana, petrologic processes in the mid-crust, spectroscopy of mineral surfaces and the search for life in extreme environments (Yellowstone hot springs to Lake Vostok ice core) as co-PI of the Image and Chemical Analysis Laboratory at Montana State University. He received his BS from the University of Michigan and his MS and PhD from the University of Washington. Dave thinks that he can still compete in long distance running and Nordic ski races, and one has to ask, "What is this guy running to or from?"

Manduca, C. A., McMartin, F., and Mogk, 2001, D.W., Pathways to Progress: A Vision and Plan for Developing the National METE Digital Library .