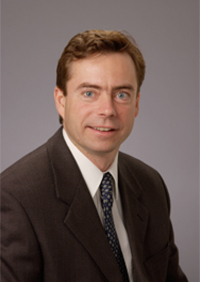 Dr. Marchant has led 19 field expeditions to Antarctica. His research has focused on unraveling past (and future) changes in the volume of ice on Antarctica. To do this, he links traditional geomorphic field observations in ice-free areas of the continent with state-of-the-art dating tools such as cosmogenic-nuclide dating and 40Ar/39Ar dating of volcanic-ashfall deposits. With these techniques, he has determined (1) that ice-free areas on Antarctica possess the world's slowest rate of landscape change; (2) that the East Antarctic Ice Sheet is among the most stable physical features on the planet; (3) that samples of Earth's ancient atmosphere occur trapped within buried glaciers in isolated regions of the Dry Valleys area; and (4) that understanding processes of landscape change in Antarctica can shed light on the style, rate, and timing of landscape change on Mars. By applying his Antarctic research strategy to understanding landforms on Mars, Dr. Marchant has been able to show that glaciers there have indeed formed in the recent past, and that the waxing and waning of these glaciers are related to changes in Mars' orbit through time.

Dr. Marchant is currently the Director of Undergraduate Studies in Earth Sciences at Boston University. He is also the 2004 recipient of the University's highest teaching honor, the Metcalf Award; in 1999, he was awarded the W.S. Bruce Medal from the Royal Scottish Geographical Society for outstanding contributions to landscape evolution and climate change in Antarctica.